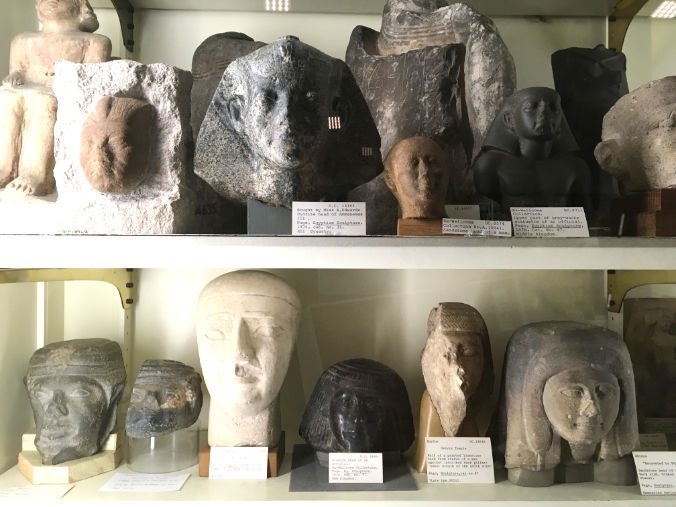 Egyptian artefacts at the Petrie Museum

Toothbrushes and old dresses at the Petrie Museum

Today I went to the Petrie Museum, in search of my toothbrush.

It’s hidden away inside University College London’s main campus. (The museum, that is.)

Thankfully, two very helpful chaps in fluo jackets guided me through the rabbit-warren of corridors and building works to the museum itself. Cheers guys.

It turns out that the Petrie Museum, which has an outstanding collection of Egyptian antiquities, is also staffed by very helpful people. The lovely lady at reception gave me a map of the exhibits, as well as the “Egyptian Trail”, which guides you to some of the collection’s most noteworthy items, and a map and guide to the “Measuring the World” show by UCL students on the BASc Arts and Sciences degree, which is what had sparked my trip.

Fully armed with my customised Museum Exploration Toolkit, I hit the galleries.

There are mummy figurines … 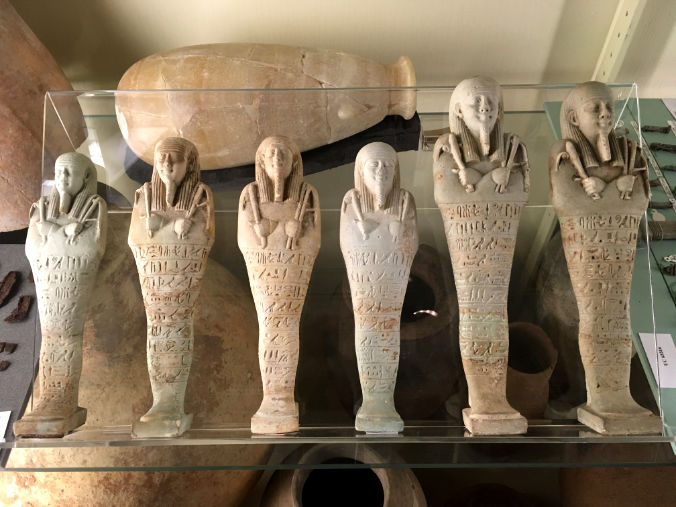 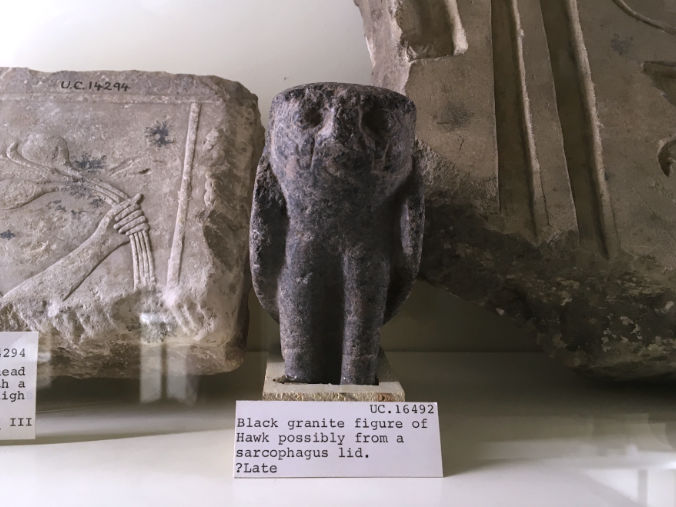 … and tablets with old-school emoji inscriptions. 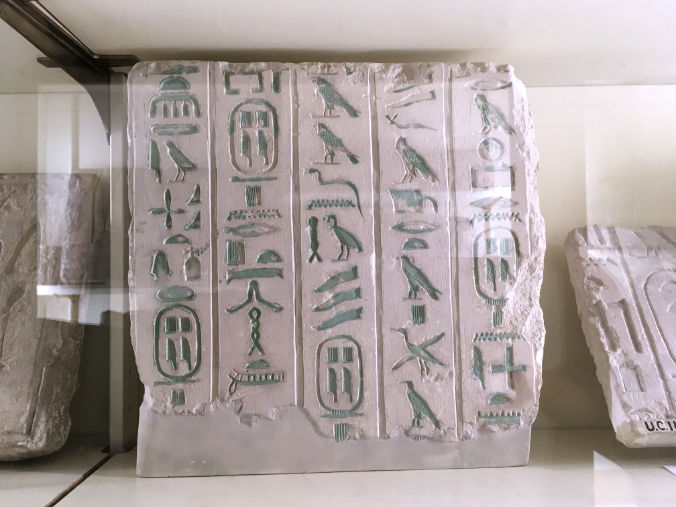 In fact, it’s all very old-school – quite charmingly so. 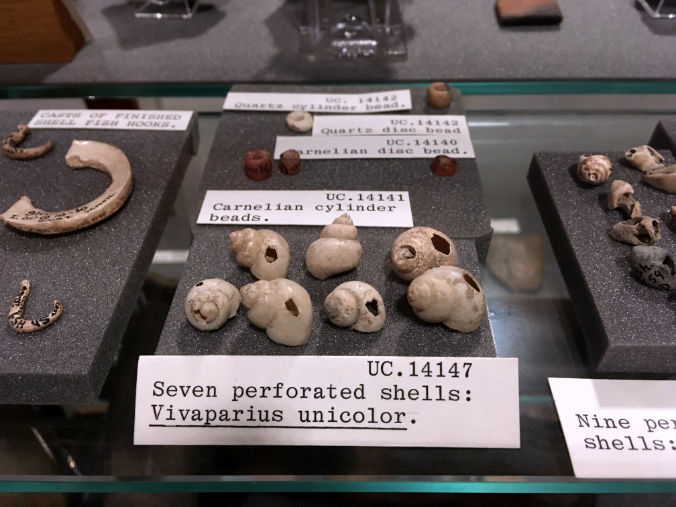 Talking of old, I was then approached by one of the gallery guides, who asked if there was anything in particular I’d like to see. (Seriously, the people here are SO NICE.) So I asked him to point me towards something *really* old. Kyle (for it was he) showed me the neolithic section, which has objects dating back to around 2000-6000BC.

Including this piece of cloth. 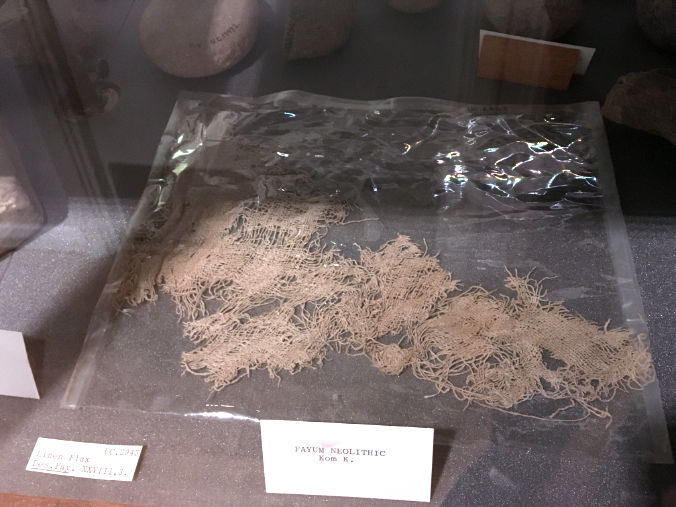 Let’s just pause on that for a moment.

This piece of woven flax cloth could be four thousand years old.

I mean, you know, flint arrows, hide scrapers, stone axes and so on are all pretty cool, but isn’t it incredible that a piece of handwoven cloth has survived for so long? How utterly, marvellously wonderful.

Oh, and did I mention the neolithic navel rounder? No? 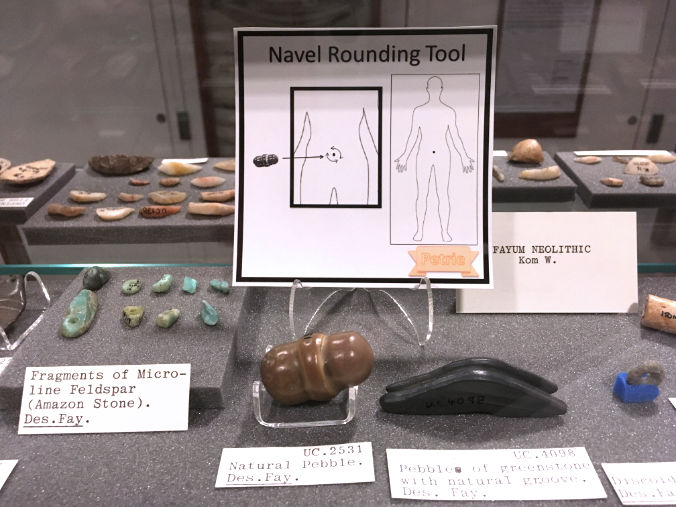 I’ve never really considered the roundness of my navel – nor my nostrils: 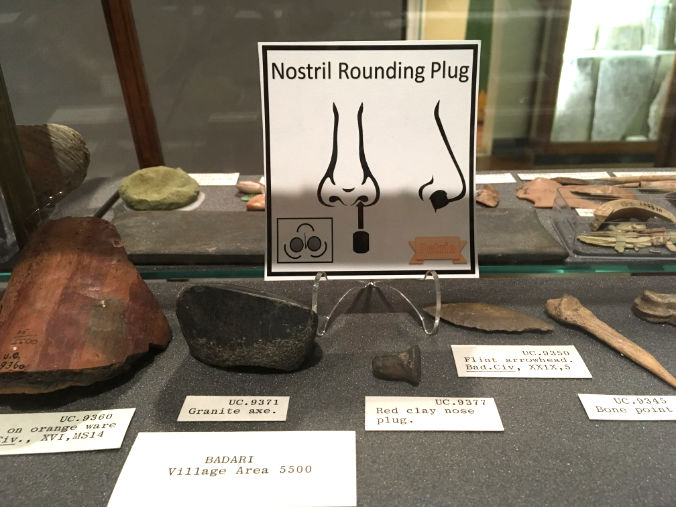 (Quick, let’s all make some and sell them to Gwyneth and the Goop gang – it’s right up their street.)

Kyle was rather amused by my excitement, and encouraged me towards the next gallery, where he said there was a dress I should see.

This is the Tarkhan Dress: 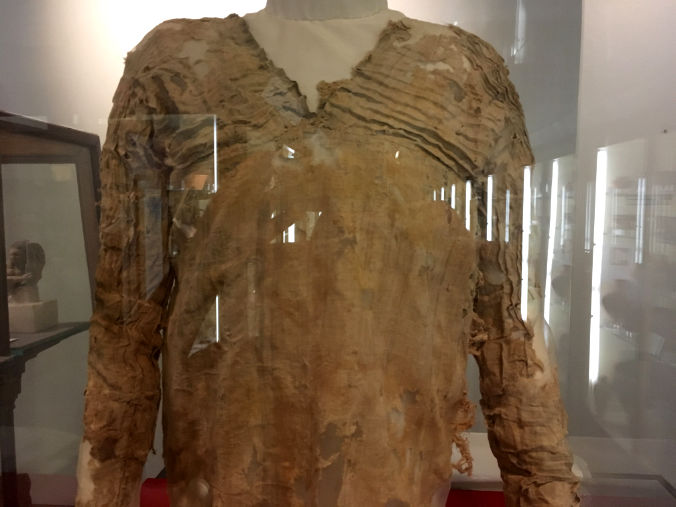 It is the OLDEST DRESS IN THE WORLD.

The restoration must have been both painstaking and meticulous – I love the little pleats across the breast, and the way the fabric has decayed leaves a garment that’s so fragile and delicate – it’s just stunning, and I hope the restorers are truly proud of their work.

These statue heads of Anubis and Horus (I think?) are also very fine. Great Aunt Sylvia, who was a sculptor herself, once told me that the sign of a good carving is that it makes you want to touch it. 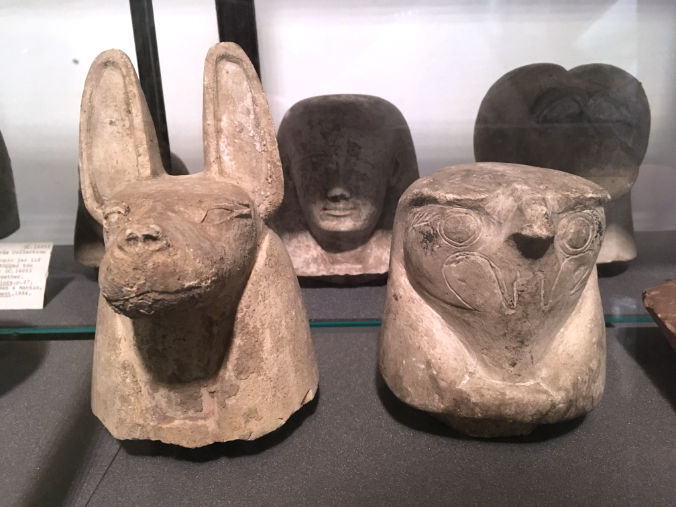 The curve of their heads is lovely.

And these bowls look like they’ve come straight off Etsy: 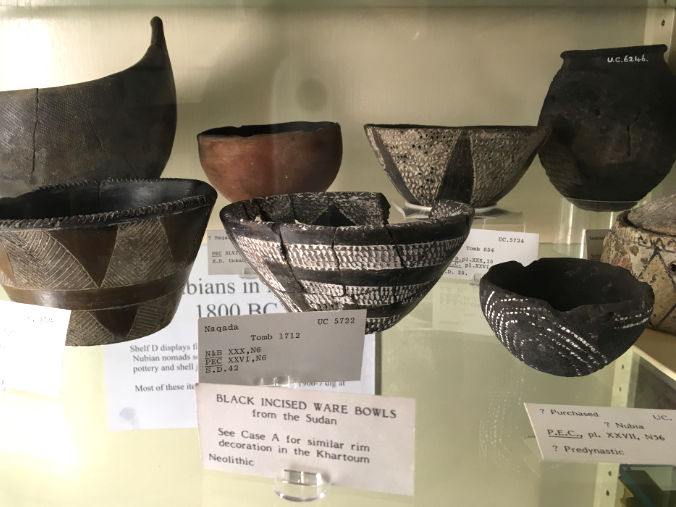 “Thousands of years old, yet so very now, darling.”

One corner of the Petrie Museum is rather darker, though.

This is a man in a pot. It’s called a pot burial because … well, you can see why. 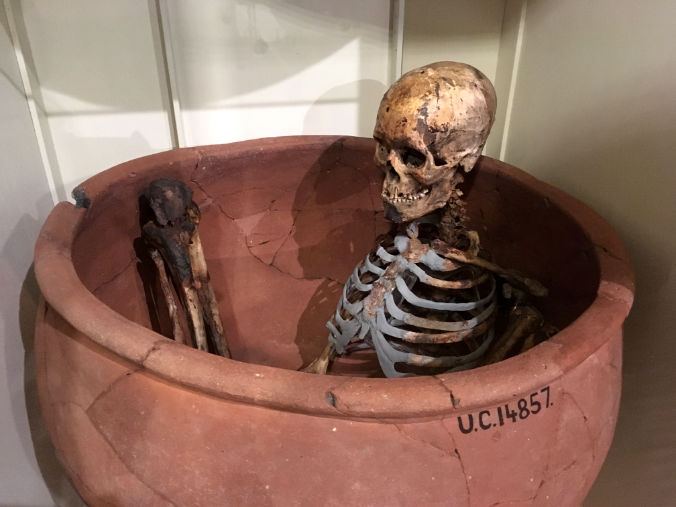 And yes, it’s a real skeleton.

He looks as if he enjoys a midnight walk around the campus.

I do not wish to be buried in a pot.

Perhaps it’s time to look at some lovely little pots instead. Here you go: 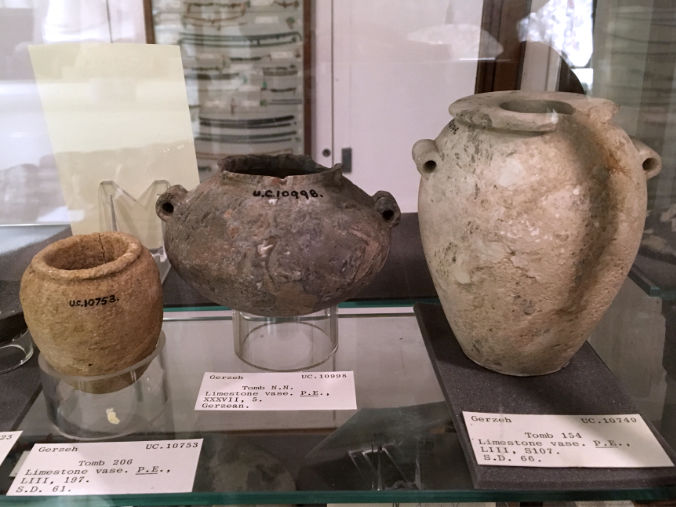 Oh, the little handles! Much better.

Then it really was time to track down my toothbrush.

And there, in a stairwell, was a cabinet containing an array of used brushes: 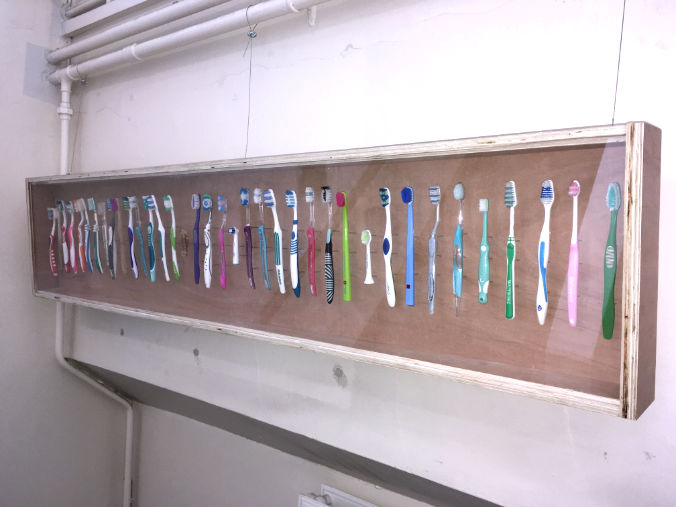 The piece is by Isabelle Reynolds-Logue and is called “Congregation”.

It sounded such an intriguing project when I read about it in Time Out, and as I needed to replace my toothbrush, I sent along the old one in response to her callout.

They’re such ordinary, practical objects, but together, you can see how each brush is so different and has altered through use. Some have worn handles, some have bristles splayed out in all directions from pressured brushing, others (like mine) are a bit grubby. (Sorry about that, Isabelle.)

There’s something about the everyday intimacy of the toothbrushes that made me want to know more about the people who’d used them. Were the splayed-bristle people angry – is that why they brushed so hard? Or were their heads drooping heavily onto the brush through an early-morning sleepy fug? Who was missing a spot? Who had fillings? Left or right handed? Did they keep them in a cup or a cabinet or on a shelf? 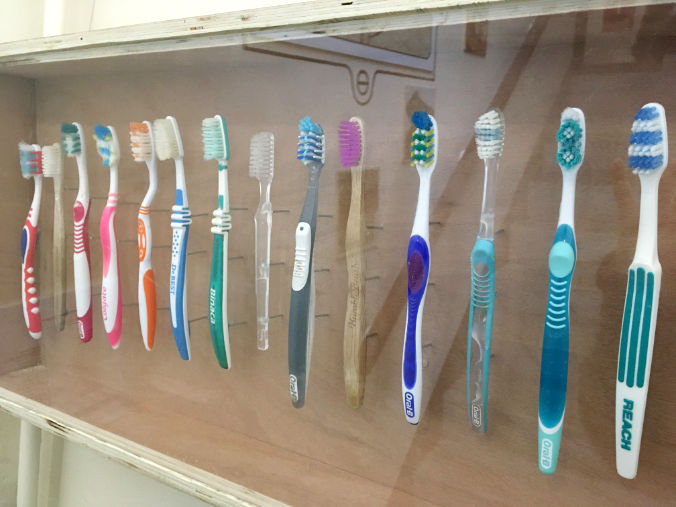 In case you were wondering, mine’s the grey Oral B between the clear one and the wooden number with the cool magenta bristles. (Excellent toothbrush, btw.)

Having found my toothbrush, it was then time for me to get lost. Without my guides, I spent twenty minutes trying to get out of the campus, returning over and over again to the Print Room Cafe, which looked very nice, but wasn’t the way out.

Finally, a kind woman in the university shop took pity on me and pointed me towards the exit and back to Warren Street tube. 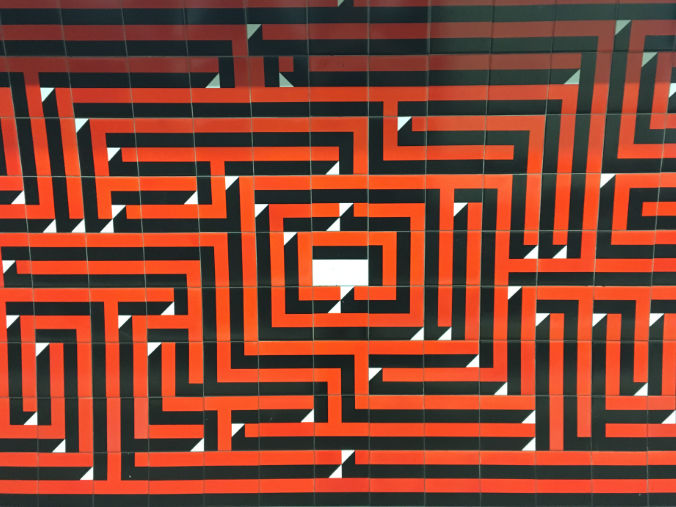 Do go to the Petrie Museum. It’s wonderful. And if you’re quick, you’ll have the questionable delight of seeing my toothbrush.

The Measuring the World show is on at the Petrie Museum until Friday 31 March.