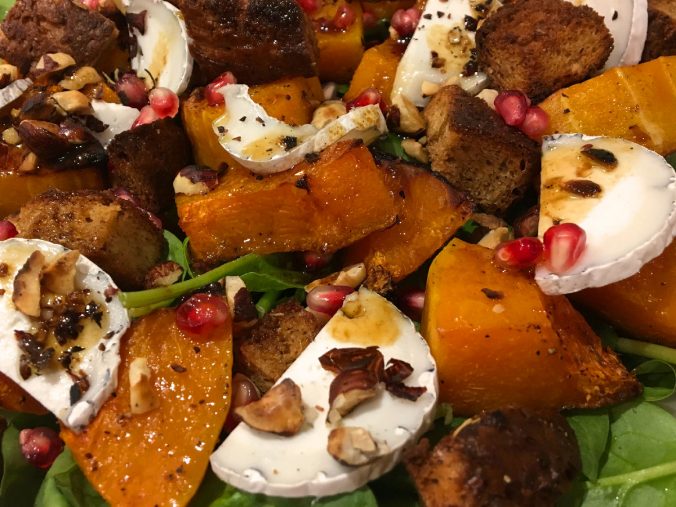 This is a hearty, warm autumn salad. The butternut squash caramelises gently and soothingly – its sweetness sets off the sharpness of the pomegranate dressing. Creaminess from the goats cheese and toasty crunch from the croutons and hazelnuts make for a midweek vegetarian supper that Ted will happily eat.

You can tweak the ingredients in all kinds of ways to suit what you have in the cupboard. Baby leaf salad would work well; the croutons could be omitted if you’re gluten free; toast some flaked almonds or unsalted pistachios if that’s what you have. Swap the goats cheese for chopped fresh figs and hey presto, it’s vegan. Switch the thyme for herbes de Provence if you prefer. The pomegranate seeds are optional – they do look ever so pretty.

This probably looks more fussy than it is – each step is very straightforward.

Serves 2 as a generous main course.

Cooking and prep time: About an hour

Preheat the oven to 180 degrees.

Peel the butternut squash and remove the seeds. Cut the squash into nice big bite-sized chunks. Arrange the pieces in a single layer on a baking tray. Drizzle with the olive oil. Sprinkle half of the thyme, the garam masala and black pepper over the chunks. Toss them with your hands until the pieces are evenly coated. Put the tray in the middle of the oven and check after 30 minutes.

Cut the two slices of bread into bite-sized chunks. Place them on another baking tray. Sprinkle over a tablespoon of olive oil and the rest of the thyme. Toss the croutons until they are evenly covered. Put the tray in the top of the oven and check after five minutes. When they are toasted and have darkened, remove and put to one side to cool. (You may choose to promote the squash to the top of the oven at this point.)

Take two large plates. Divide the spinach between the plates and spread it out evenly so it’s flat. (Don’t make a pile in the middle or the other ingredients will roll off.)

Whisk together the ingredients for the dressing.

Crush the hazelnuts into large-ish chunks. (I wrap them in a clean tea towel and bash them gently with a rolling pin. It’s fun.) Toast the chunks in a dry frying pan until they’ve browned. (Keep an eye on them – like almonds, they will catch. #learnfrommymistakes)

Slice or crumble the goats cheese into small pieces. (The one I had wasn’t crumbly so I split it down the middle, then sliced it into small, thin moons.)

Once the butternut squash is nicely caremelized – the edges will have caught – but before it goes very soft, remove from the oven and let it cool for a few minutes. When it’s still warm, but not hot, divide the chunks into two and spread evenly on the plates of spinach.

Dot the plates with the croutons, then the goats cheese, then the hazelnuts. Sprinkle over the pomegranate seeds.

Give the dressing a final whisk, then drizzle it over the two plates of salad. It will be scant – it’s quite strongly flavoured so you don’t need much.

food, in the kitchen