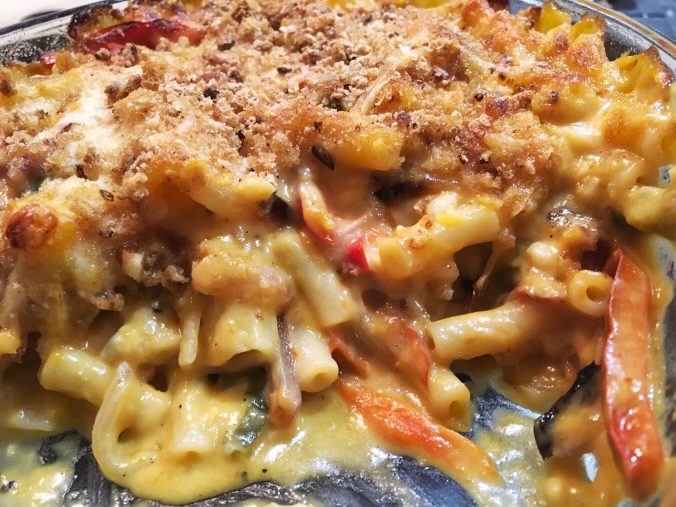 While it does sound a bit ridiculous to keep puréed, roasted butternut squash stashed in the freezer, it does come in handy at times. Like when your husband stumbles in, as he did last night, exhausted from a really tough day at work and needs some comfort food, stat, but you’d planned some healthy, crunchy, veggie wraps.

(Because squash stores for ages, I’ll pick one up and then chop it up and roast it the next time we’re putting something in the oven – it stops me feeling guilty for using that much electricity for just one thing #savetheplanet ? Then it’s just a case of puréeing it when it’s cold, with a bit of water if needed, and freezing it in half-cup portions. I promise you, on nights like this, the purée feels like a gift from your fairy-godmother past self.)

Anyway, the wraps went out of the window ’til tomorrow, and the experiment began.

Sweet red peppers and onions, roasted ’til they crinkle and brown in a hot, hot oven; a basic cheese sauce bulked out with secretly stashed veggies; some spring onions that were on their way out, cleaned up, sliced thinly and fried ’til they’re oh so umami. 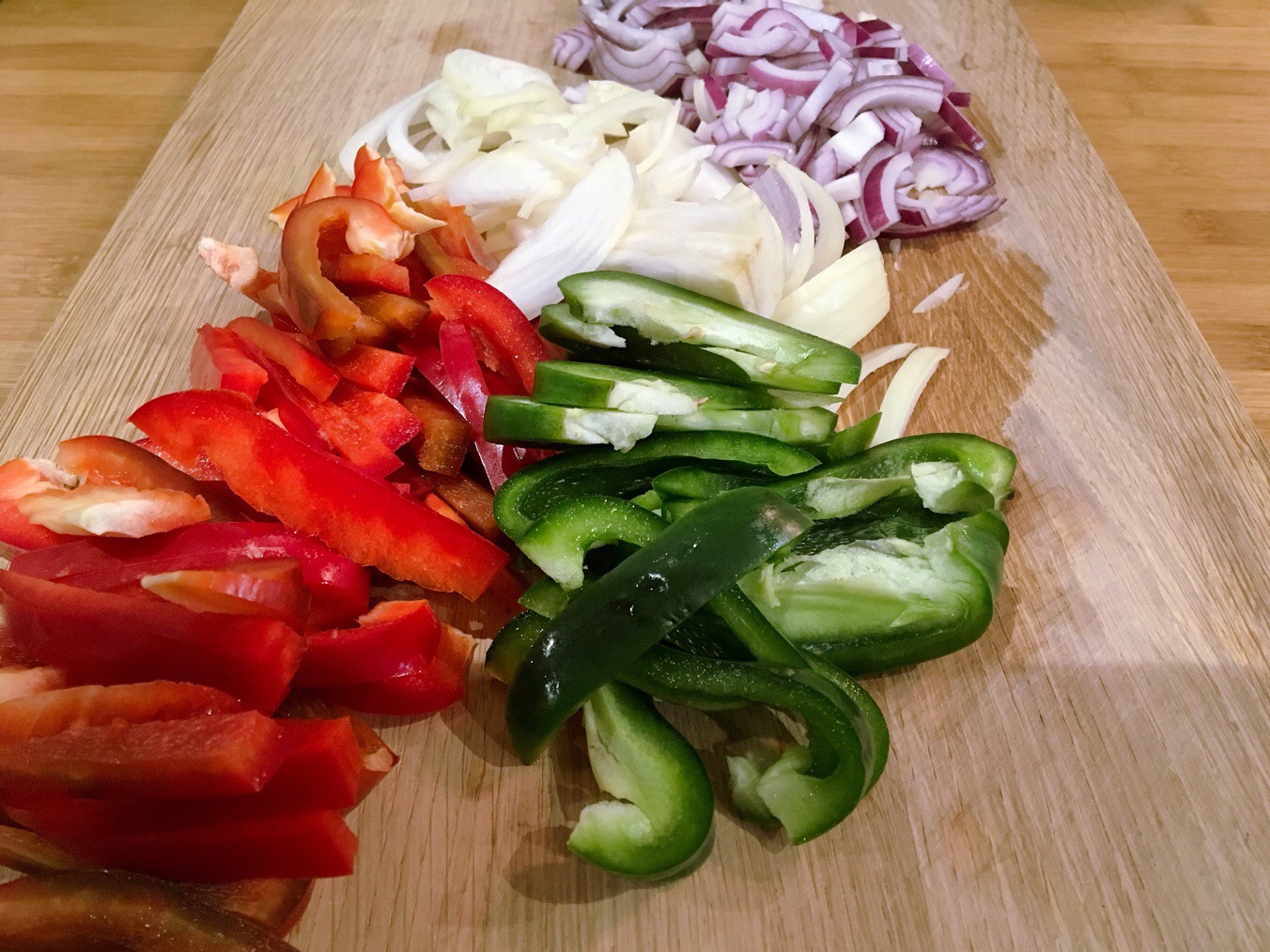 And cheese, because on nights like these, he needs cheese.

Popped in the oven, it emerges golden and bubbling. A BBC4 rockumentary on the TV, a bowl of volcanically hot veggie bake, some fuss from the cats, and he didn’t even notice there was no meat.

(Or mix these up, based on what you have. Other colour peppers work fine too.)

Preheat the oven to 180 degrees C.

Slice the peppers and red and white onions thinly. Spread them out on a baking sheet, drizzle with a couple of tablespoons of olive oil and toss. Spread them out evenly and roast for 20-30 minutes, tossing once or twice, until the vegetables have browned nicely and caught in places. 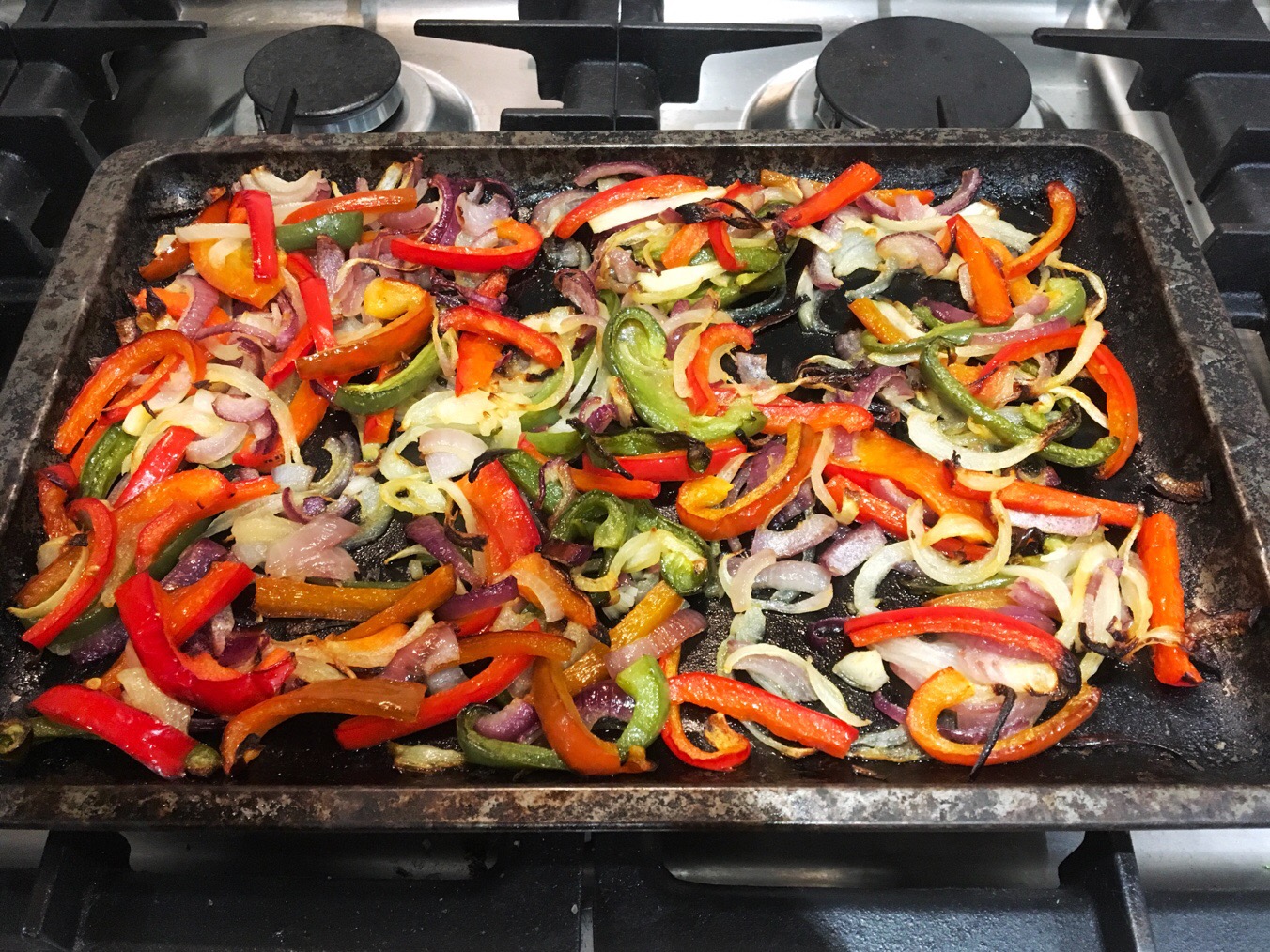 Meanwhile, boil the kettle then cook the pasta for 8 minutes, then drain and rinse it with cold water.

Then slice the spring onions finely and fry them in a little olive oil on a very low heat. Let them fry away while you do the next steps, stirring them occasionally. (If you don’t have spring onions, either ignore this or use some regular onion, shallots, garlic – whatever, it’s all good.)

To make the roux, melt the butter in a medium-sized pan, then add the garlic and mustard powder and fry for a minute or so until the garlic is golden and fragrant. Add the flour, whisk and fry for another minute or two.

Whisk in the milk, a bit at a time, then cook it off for two or three minutes until it’s smooth and thick. Stir in most of the cheese (keeping back a couple of tablespoons) until it’s melted, then add the puréed squash. (It’ll look abominable for a minute – don’t worry, just keep stirring.) Add plenty of black pepper and maybe a pinch of nutmeg if you have some lying around.

When it’s nice and smooth, stir in the spring onions, then the roasted vegetables, and finally the pasta.

Pour the mix into a baking dish, sprinkle the last of the cheese and the breadcrumbs (if using) on top and pop into the oven for 20-30 minutes until it’s golden brown all over and bubbling nicely. 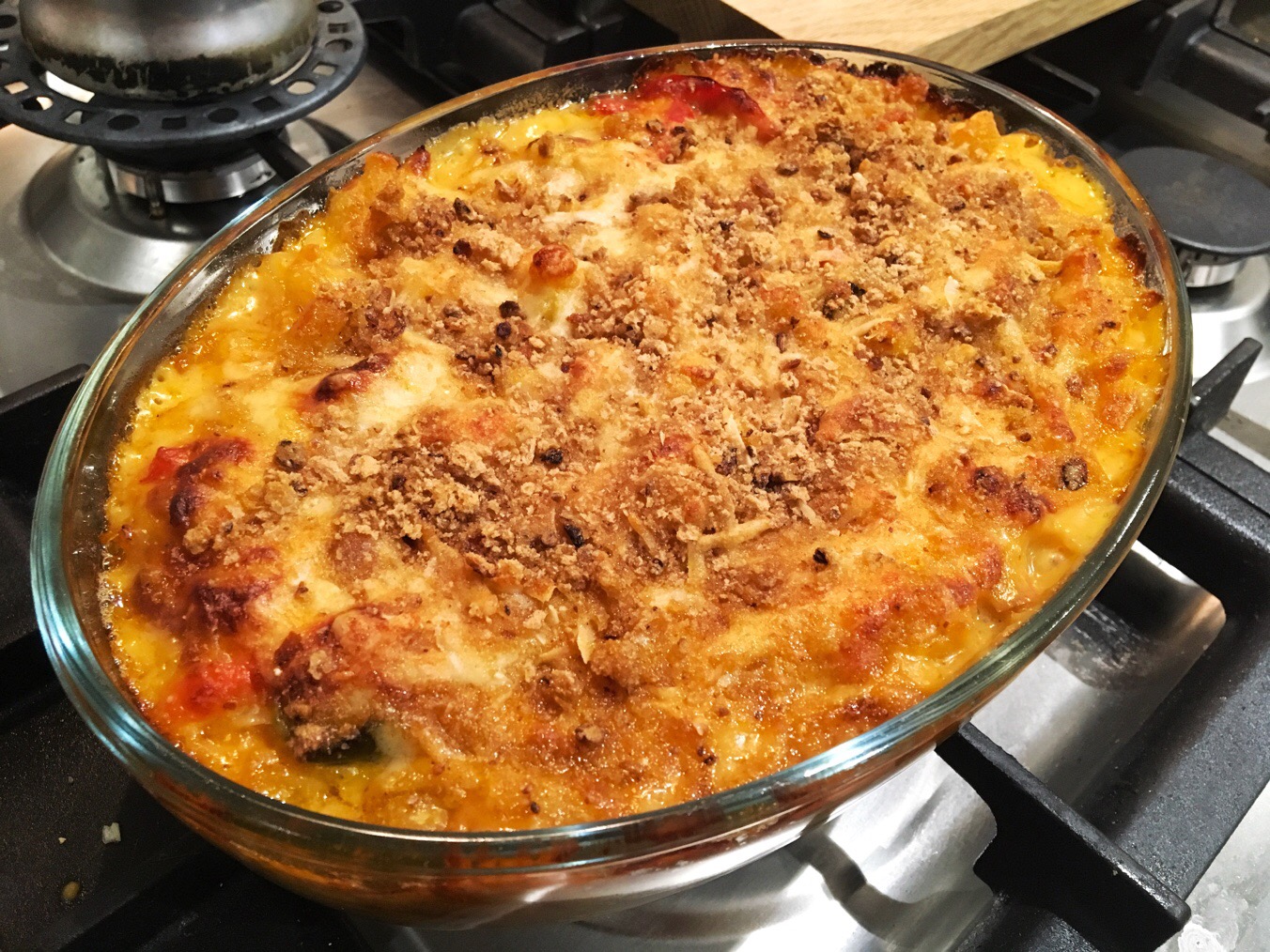 Serve with a green salad, or perhaps just as is, if he doesn’t need that kind of hassle tonight.

Because he works so hard.