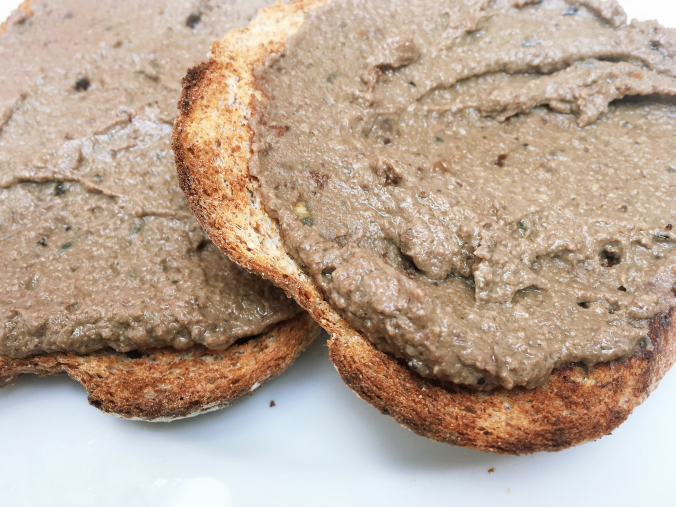 For various reasons, this week I’ve been thinking about female friendship, how we nurture and care for each other, and how we express our friendship through the things we make and do.

More on that another time, but it then got me remembering happy days in the mid-90s when two of my besties and I played house while at uni.

But we shared food, cooked together, learned each others’ recipes and laughed a lot.

(Also there was that time when we fed the chaps’ – now husbands’ – Sunday roast dinner to someone else because they buggered off to the pub. Fair play to him, Ted’s been there for supper ever since.)

We had a chart on the wall listing things we liked, and things we didn’t, and top of the likes was chicken liver pâté – or CLP as it was known to us.

So I made this today to celebrate female friendship, and to remind myself of happy times with Pippa and Mary at 95 Marlborough Road.

Chicken livers are getting harder to find, which is a shame, because they’re cheap and yummy. But Waitrose sells them in 250g packets, frozen, so the quantities below are designed to fit.

CLP occasionally turns out a little bitter – maybe if the livers aren’t trimmed properly – so instead of classic brandy, I added a small slug of blackcurrant liqueur we acquired when in Poland for Littlebrother’s wedding. (More happy memories.)

This recipe makes enough for several slices of toast, or a generous starter for four. (You could stretch it to six if one of them’s not Ted.)

Melt two thirds of the butter in a frying pan on medium heat because that cooks out all the calories and saturated fat.

Cube the rest of the butter and set to one side.

Add the onion to the pan and fry until it’s soft but not brown.

Then add the garlic, livers, all-spice, salt and pepper. Fry, turning occasionally, until the livers are browned on the outside but still tender and pink on the inside. (Use your x-ray eyes to see or take a guess.)

Add the liqueur, if you’re using it, and stir and fry the mixture for a minute or so until the alcohol has evaporated.

Pop the lot in a blender, along with the butter you’ve kept back, and blend it until smooth. (All the butter will make it so, so smooooooooth.)

You can put it in a ramekin and seal it with melted butter (!) if you’re feeling fancy, but it never lasts that long in our house, so I put it into a bowl to cool and then cover it and straight into the fridge. Also I have no ramekins.

CLP is best enjoyed on hot toast, accompanied by large glasses of wine and scurrilous gossip.

Exhibition: Entangled at the Turner Contemporary, Margate (and more adventures)