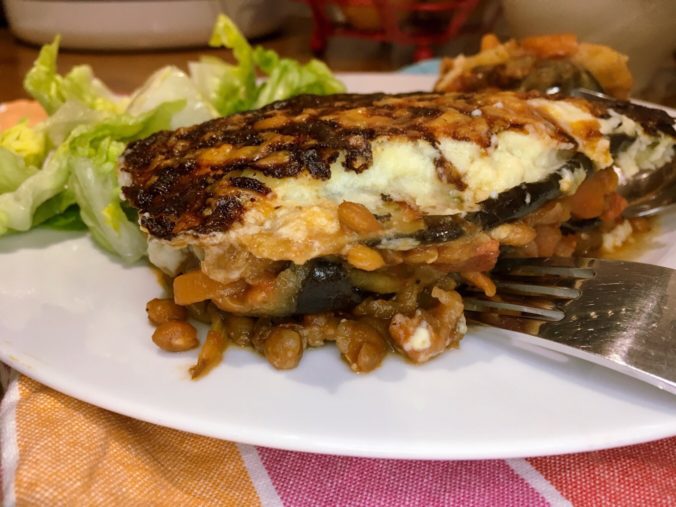 Boo! The cold weather is back. We were so nearly through February too.

I hate February. It’s the month when new year’s resolutions crumble and fall, and yet spring still feels so far away. A cold, grey month with a backdrop of misery.

Time for some comfort food.

I don’t find new year’s resolutions are much good for anything other than beating yourself up with the guilt stick, so I gave them up many years ago. Instead, we often do dry January and try to adopt behaviours that’ll make us better people. ?? I find this less rigid and more effective at changing our less healthy/virtuous/kind actions into good ones.

Some of these turn out to be pipe dreams – FIX ALL THE THINGS! PAINT ALL THE BOARDS! – but others I’m really committed to changing, especially – and this is a big one – to reduce the amount of meat we eat. And we’ve been trying really hard to do that the past few weeks.

I don’t personally feel a need to cut out meat completely, but over the years my intake has fallen as I’ve tried to make it a conscious choice. It’s tough for Ted, though, because he really seems to have that need for protein.

Anyway. I tried batch-cooking bolognese sauce and chilli con carne where the meat was half-replaced by lentils. He wasn’t a fan of them, but has come around to some hearty vegetarian dishes instead. So we’re focusing on those and we’ll see how it goes.

There’s a roasted red pepper lasagne that’s a house favourite now, and I’ve just experimented with another lasagne that might hit the blog soon. But today I want to tell you about this vegetarian moussaka.

It’s adapted from Rick Stein’s recipe in his Venice to Istanbul cookbook. Both the TV series and the book are wonderful, btw. But I was quite horrified by the amount of oil he uses to fry the aubergines and courgettes (300ml!!! That’s not a recipe for supper, that’s a recipe for new trousers) and a bit concerned about the amount of fat that would render from the mince.

I then tried the half-lentil trick with it, but both of us wondered if it might be nicer all veggie. We tried that, and it was. Surprise! (No, really, we were very surprised.)

So this is adapted to make it a) less oily, b) vegetarian.

The meat is replaced by a lentil mix that I start on the hob, then stew in the slow cooker.

The strips of courgette and/or aubergine are roasted in the oven rather than fried in a pan – this uses much less oil.

The rest is pretty much as Rick wrote it, though I’ve done the usual and swapped out fresh tomatoes for tinned, and the Gruyere for whatever I had in the fridge (usually a combo of cheddar and parmesan, I mean let’s face it, no cheese is bad cheese).

There are several stages to this, but the first – and longest – you can start then pop in the slow cooker. The rest is super easy – roast the courgettes or aubergines in the oven, sauté the potatoes, make a bechamel sauce, and boom, you’re there.

Feeds 6 people, or 8 for lunch, with bread and salad.

Fry the onion in some olive oil on a medium-high heat until it starts to go translucent. Add the carrot and celery and fry, stirring occasionally, until they start to brown. This may take some time – that’s fine, relax, it’ll get there. When they’re nicely browned, add the crushed garlic and stir fry for a minute more.

Add the tomatoes, vegetable stock, lentils, oregano, chilli flakes, salt, pepper and cinnamon. Stir, raise the heat to high and bring to the boil. Put in the slow cooker for four hours. (Alternatively you can pop it in a low oven for a couple of hours or stew gently on the hob until the lentils are nice and soft.)

About an hour and a half before you want to serve it, switch on the oven to 200 degrees Celsius.

Fry the potatoes in batches on both sides until they’re soft. Put them to one side and keep them warm.

Slice the aubergine or courgettes lengthways, about half to one centimetre thick. If you salt them, salt them, drain them and pat dry with kitchen towel – personally I don’t bother these days. Brush the cut sides with a little olive oil, put them on a baking sheet and pop them in the hot oven for 10-15 minutes until they’re browned. Take them out of the oven but leave the oven on. Keep them warm with the potatoes.

Now it’s time to make the bechamel sauce. In a saucepan, melt the butter on a low-medium heat and add the flour. Stir well and keep stirring to make a roux. When it’s cooked but still pale – two or three minutes – add the milk a third at a time, whisking it in. Keep whisking. When the bechamel thickens to a thick custard consistency, turn off the heat. Add the nutmeg and stir that in too.

Take an oven dish about 20x30cm and at least 5cm high. Layer the potatoes on the bottom. Then layer the lentil mix. Layer the aubergines and/or courgettes. Layer the bechamel sauce next and then sprinkle the grated cheese on top.

Put in the oven for 30 minutes until browned and bubbling on top. Serve warm with salad and perhaps some crusty bread.