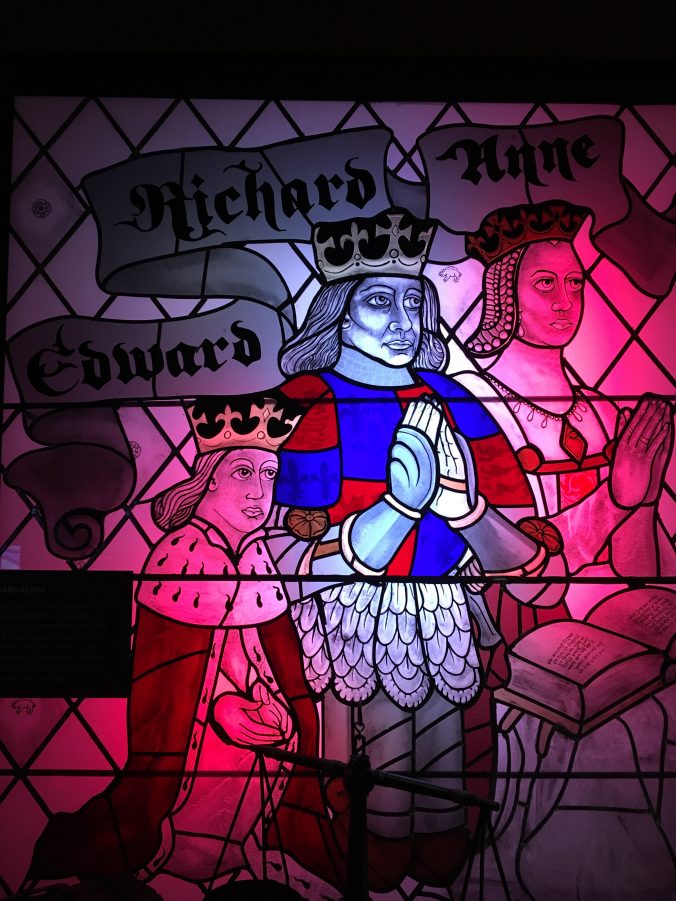 Stained glass of Richard, his wife Ann and his son, Edward

Trip to Leicester to catch a king – and some crafty goodness

So we’re just back from Leicester, where Ted was doing some research. I tagged along to see the Richard III stuff there, and was glad I did. It’s really well done – they’ve brought across the turbulence of the times, the bloodiness of the battles and the excitement of the discovery of his burial site. 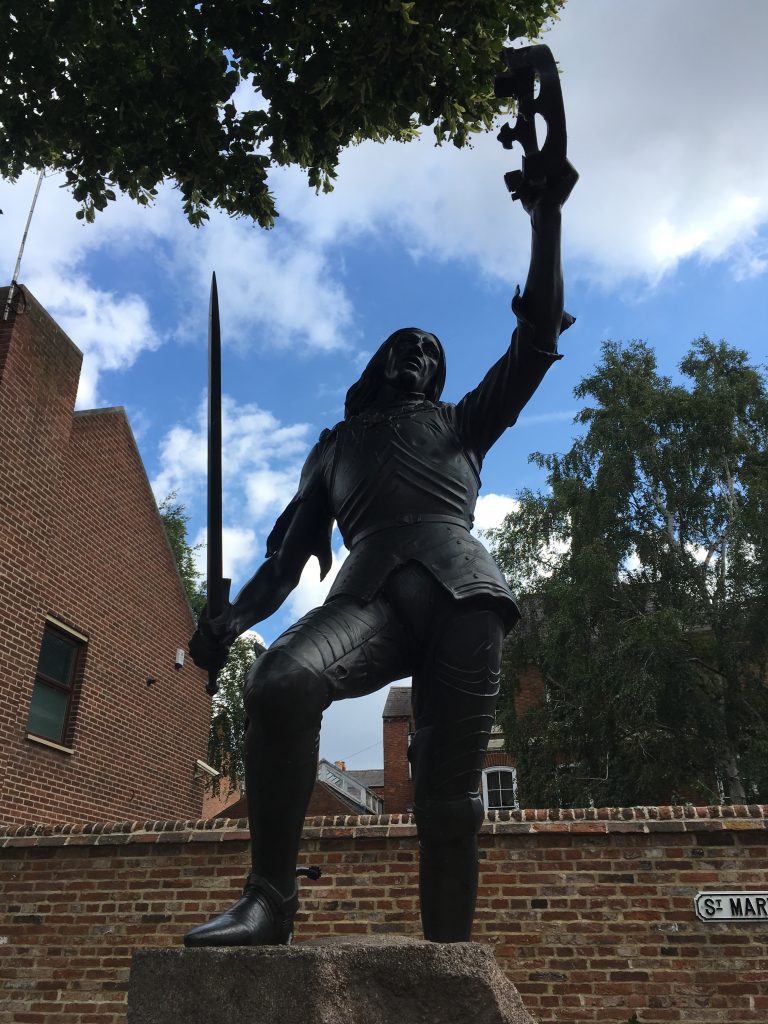 I was touched by the dignity and thoughtfulness that went into the presentation and curation of his burial site and his tomb, which is nearby in the cathedral. In particular, the volunteers are very friendly and knowledgeable – they made it a very special visit. 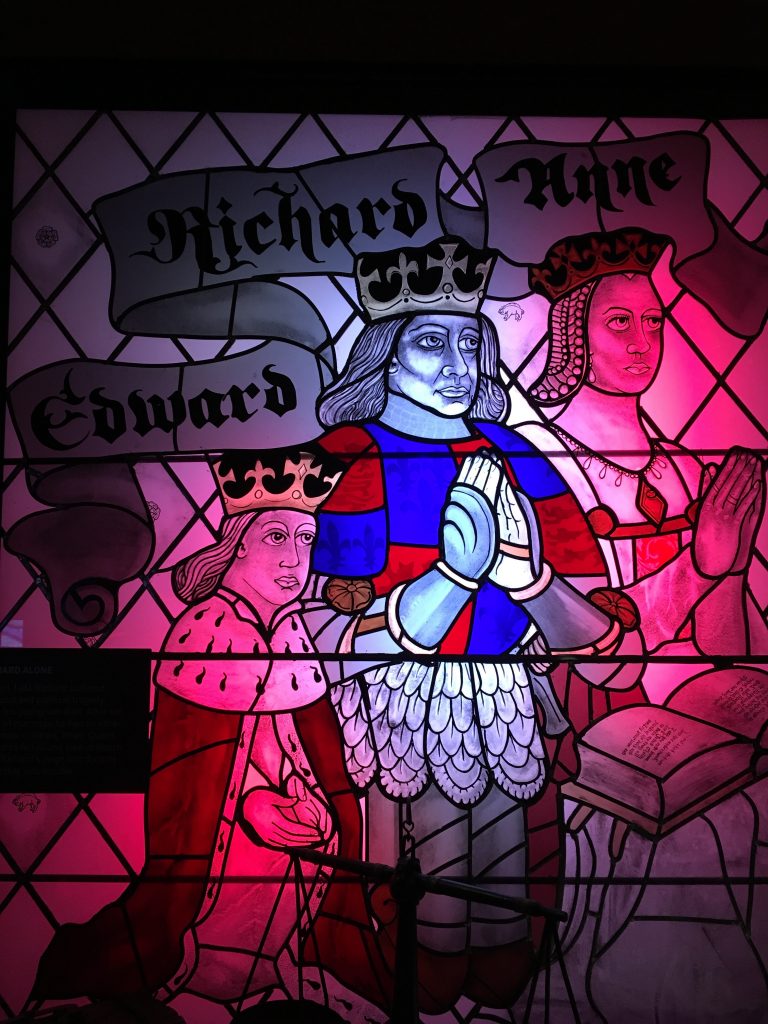 Stained glass of Richard, his wife Ann and his son, Edward

The cathedral is beautiful, and his resting place is made from Swaledale fossilized stone – to symbolize his link with Yorkshire – set on a plinth made from black marble, from Kilkenny, which is twinned with Leicester. 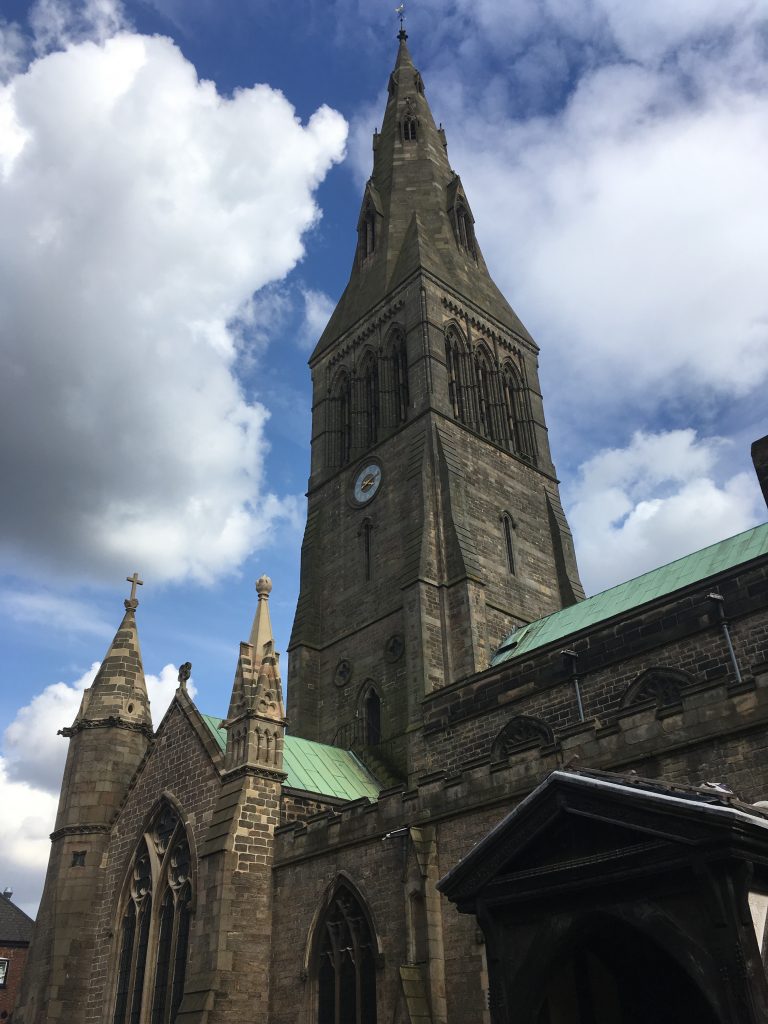 On the tomb, you can see a crocheted white rose, which was brought by a visitor from Yorkshire. She said that she’d wanted him to be reburied in York, but after seeing him in Leicester, couldn’t imagine him anywhere else, as they’ve done such a lovely job with the visitor centre and the cathedral. (I agree.) 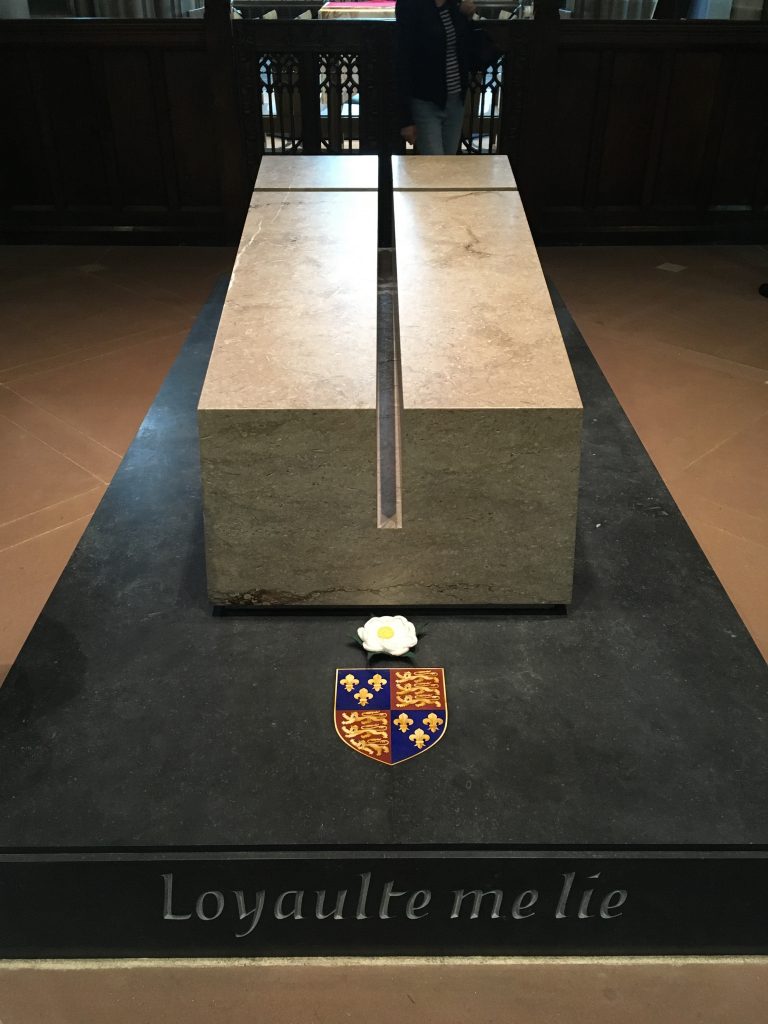 Thanks to Ruth and Julia, a couple of local crafty people, I also made time to explore some of Leicester’s crafty stalls and shops. (Links to their tips are below.) The market is great – there was one stall with a good range of nice polycotton plains and cotton prints from £2/metre.

Stuart’s Fabrics, a small shop in the market, has a good selection of quality stuff from around a fiver a metre: 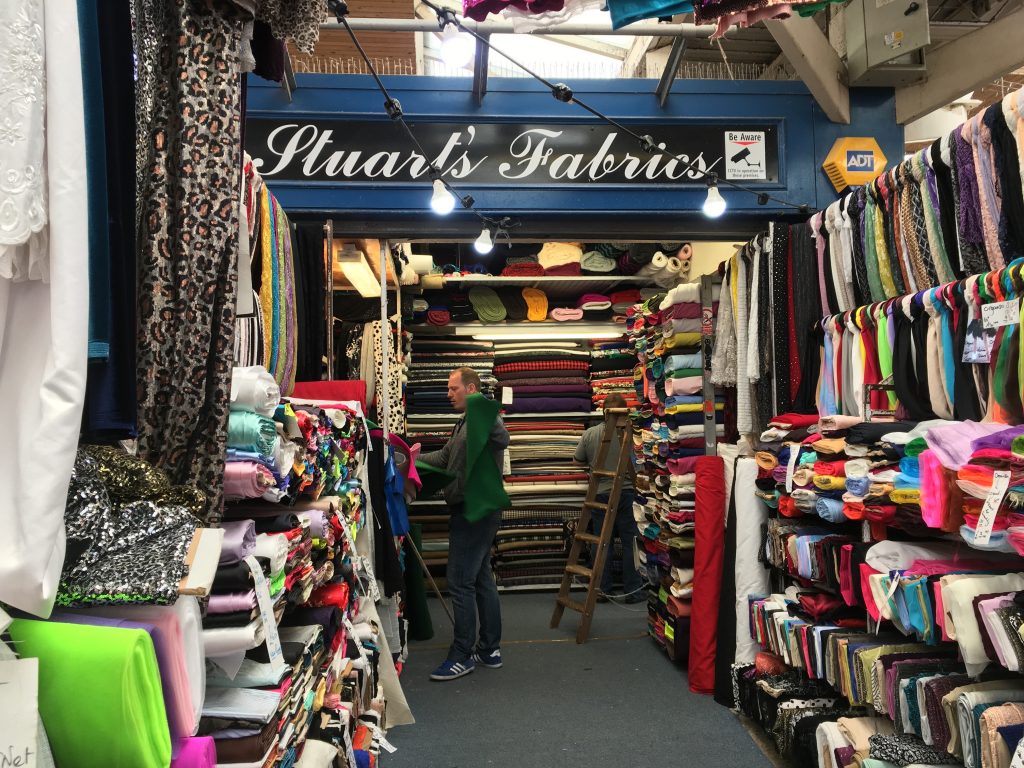 On Tuesdays, there are a couple of haberdashery stalls too – one focused more on wool, the other on trimmings. They had some fun stuff. 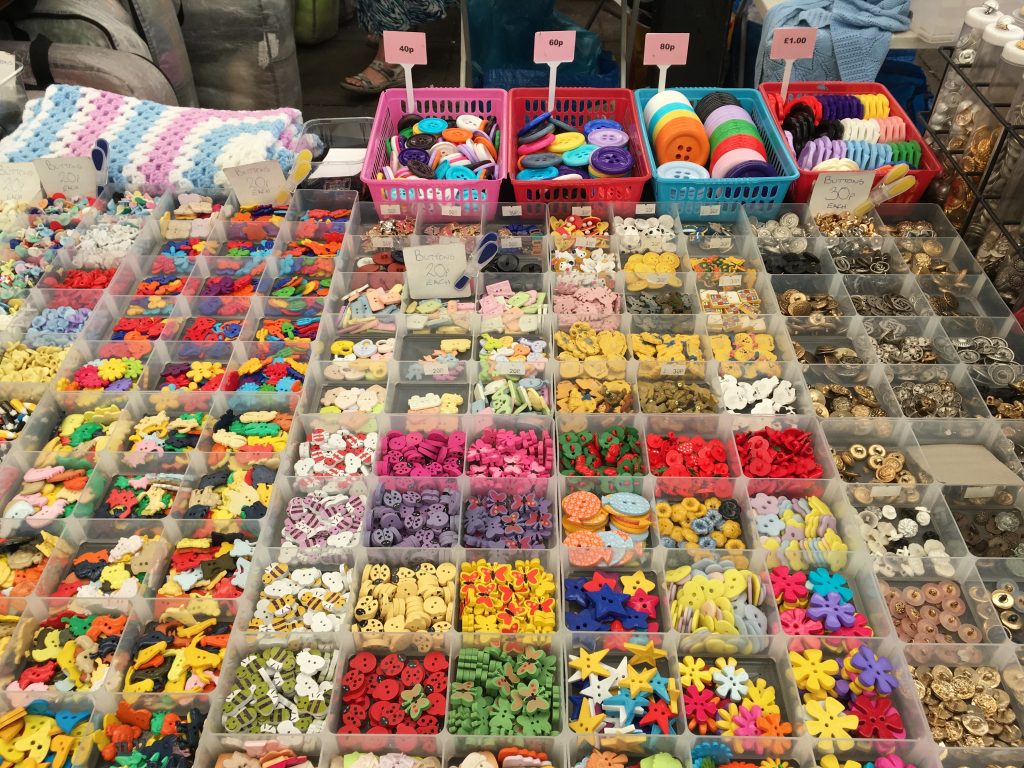 More trimmings at nearby Button Boutique: 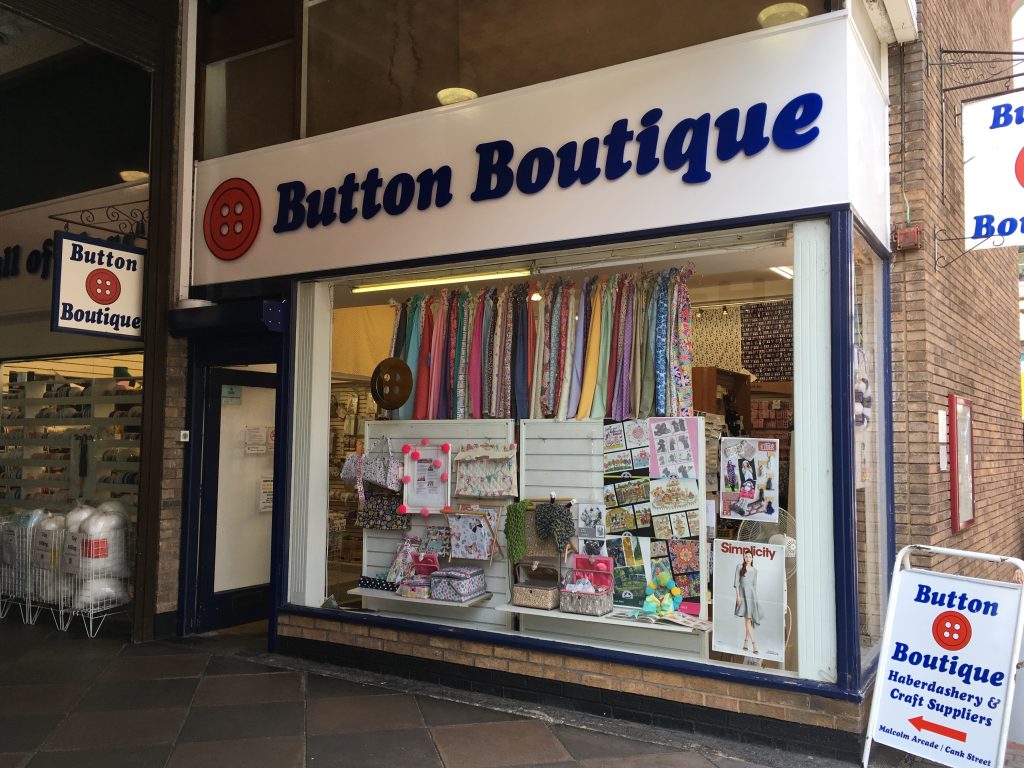 Ribbons, trims, small lengths of cottons – and of course, buttons

And some excellent fabric deals at , including some rather *ahem* familiar looking prints, “inspired” by Liberty, at Material Magic … 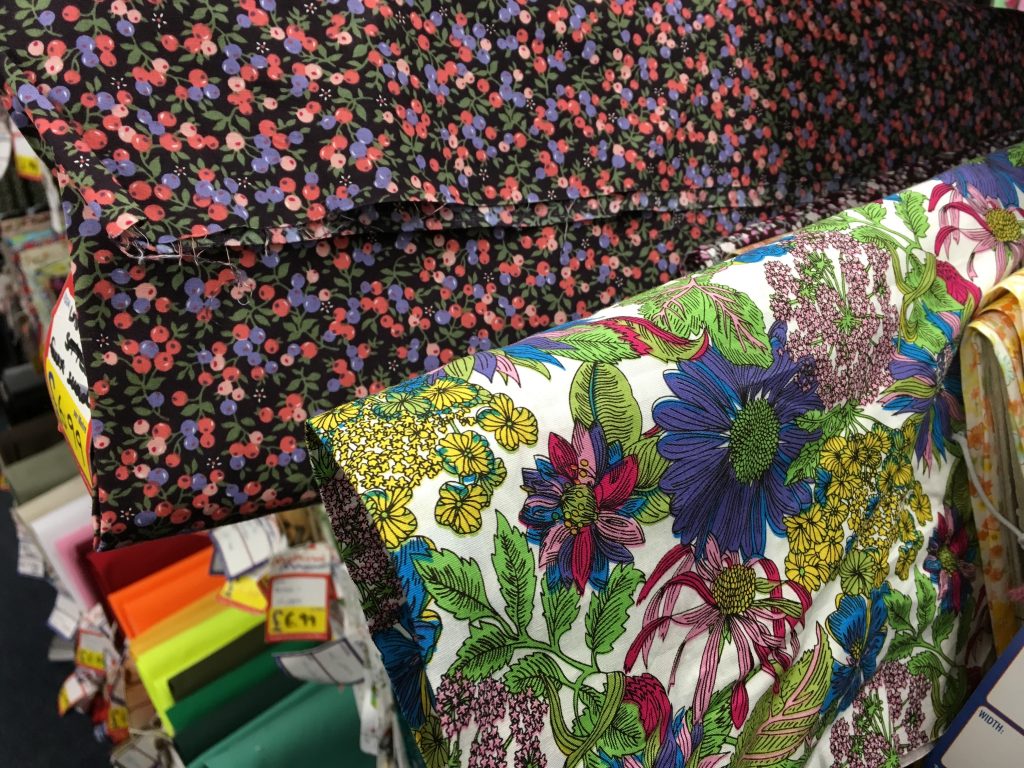 Leicester’s charity shops are also worth a trawl – one was having a 25p book sale (!!!) so obviously my suitcase was rather heavier on the way back.

(As was I – for Leicester is also famed for excellent curry, and as we discovered, rightly so.) 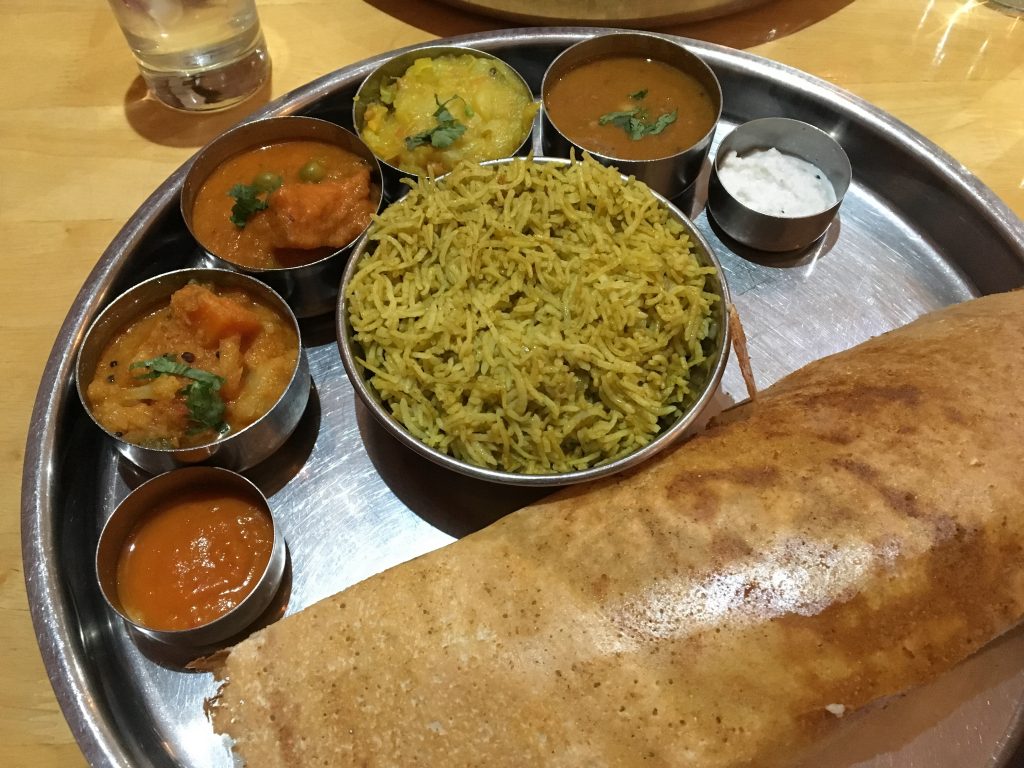 Business lunch at Kayal. Because I’m on business. History business!

Leicester tips:
We stayed at the Premier Inn Leicester City Centre, which was modern, clean, spacious and run by very friendly folk. (In fact, all the people we met in Leicester were lovely.) It’s very central and right by the station.

Crafty tips:
Ruth Singer’s list of Leicester sewing shops
Julia Claridge of Bobbins n Buttons on where to buy fabric in Leicester
Material Magic is right by the market
The charity shops on Granby Street are also definitely worth a trawl