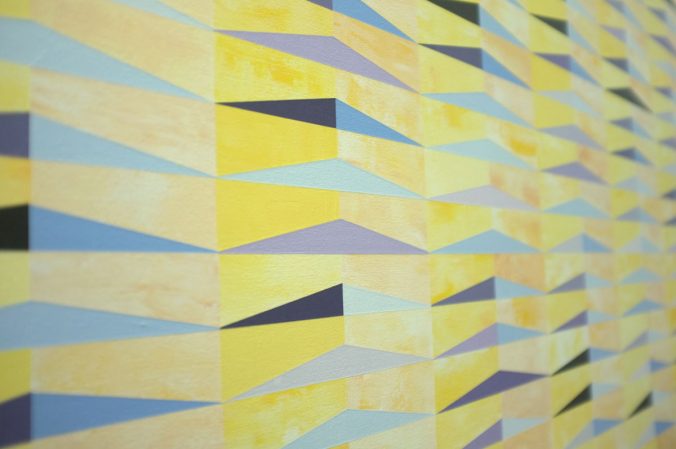 One of my real passions is art and craft from local artists and creators. So today I’d like to introduce you to the work of an extremely talented artist and someone I’m happy to call a friend, Brixton-based artist Judith Rugg.

Judith previewed her latest series of paintings last month and Ted and I were both so taken with them that I had to share them with you.

The series is called “Gridlock”. The 18 paintings are exploratory geometric presentations that play with light and form. They have a meditative, thoughtful quality and are, I think, very beautiful. 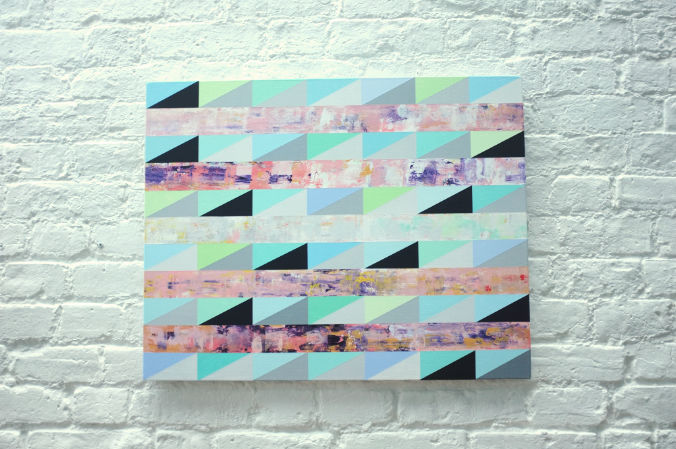 Judith’s work is rooted in the urban environment. Her previous series focused on the relationship between architectural facades and the way in which we view them, while this series takes that theme a step further, as she explains:

“They became focused on this idea of the grid really as a link motif of a universal architectural surface … modernist buildings or tiles or windows – a uniformity of things and their relationships between each other.” 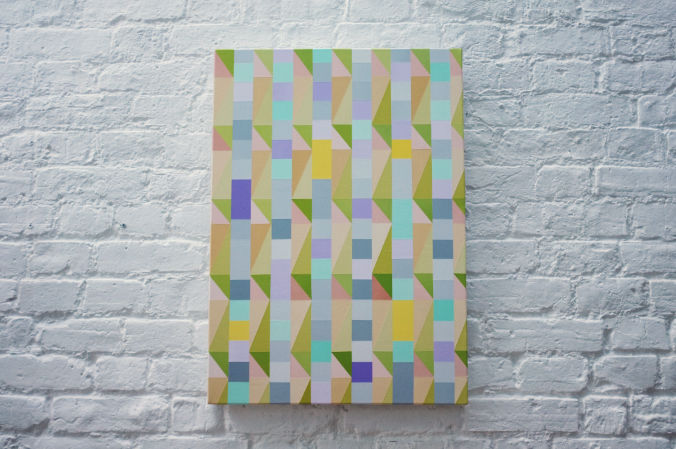 The works are further abstracted from her previous work, though their link to the modernist aesthetic and its focus on light is still present. “You take away all the embellishments and you’re just left with colour and surface and light and space,” she explains. “It’s all based on this uniformity and how we can interrupt that.”

This interplay between light and colour, a “painterly relationship with colour and surface,” has its roots, Judith says, in mathematics, when she first started developing the series towards the end of last year. 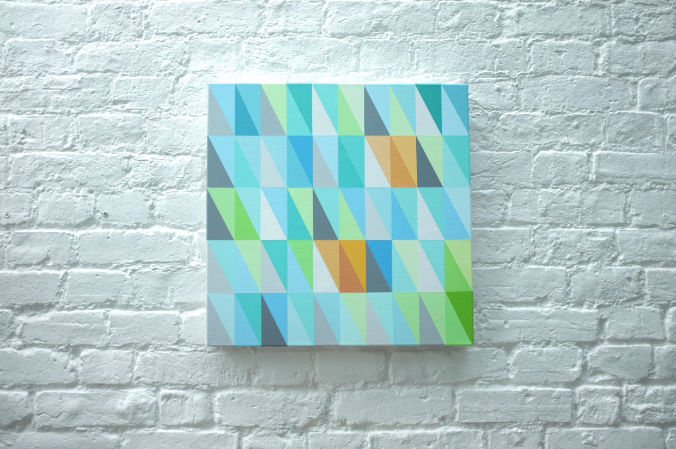 “It’s very difficult to work in the winter because there’s no light,” she says, “so I spent a lot of time just playing around with drawing, taking lots of photographs and exploring ideas just through maths, really, using graph paper and working things out and making lots of colour sketches.”

“What was emerging was … what happens when you base things on a set of repetitions, based on quite a simple grid form, and you change it slightly.” 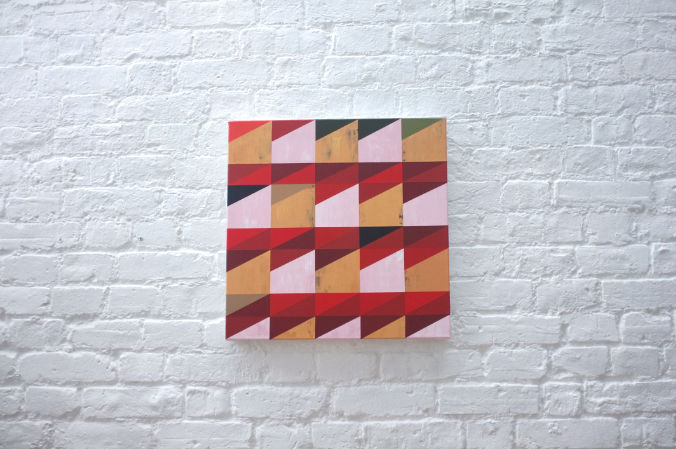 The paintings are meticulously produced. After initial sketches in pencil and water-based acrylics, the full-size works are created using techniques Judith learnt as a printmaker.

“My previous work was screen printing, so in lots of ways they do echo that process where you’re using flat colour and you’re building up surface,” she says. 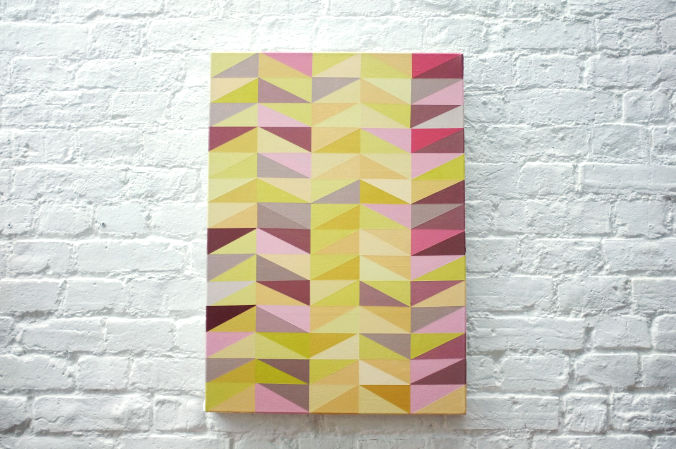 The precision of the paintings is key. “It’s about taking away the evidence of something that’s been hand-made,” she explains. “I wanted them to look like they’d kind of been made by machine.”

Judith does this using tape, set squares, T-squares, “lots of measuring” and thin plastic cards, which she uses to draw the paint across the canvas.

This produces hard geometric lines, which are contrasted in several of the works by a softer, warmer colour palette or, in others, in a bolder complementary tonal range. 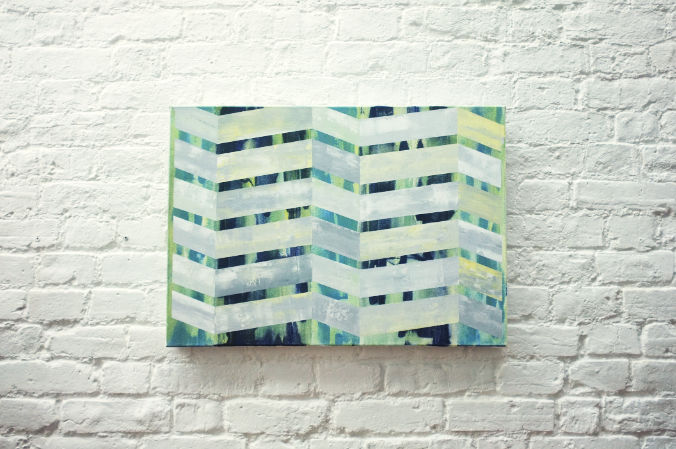 “I wanted them to look quite flat … it’s almost like they reflect light, they come back at you which is then interrupted by a more dense colour, a more concentrated colour,” she explains.

For the next phase, Judith is now exploring how to distort these works using a computer program. “What happens, for example, if I change the angle of the segments – each individual element, how does it [then] contribute to the whole? … If you change the angle, you have a completely different sense of the relationships between all the units and the way in which we see it.”

This may see her work evolve away from the urban environment. “Then it becomes about space and light and about almost landscape,” she says. “I wasn’t necessarily aiming for that, but that’s what I think for me is coming through – the sense of a landscape space. 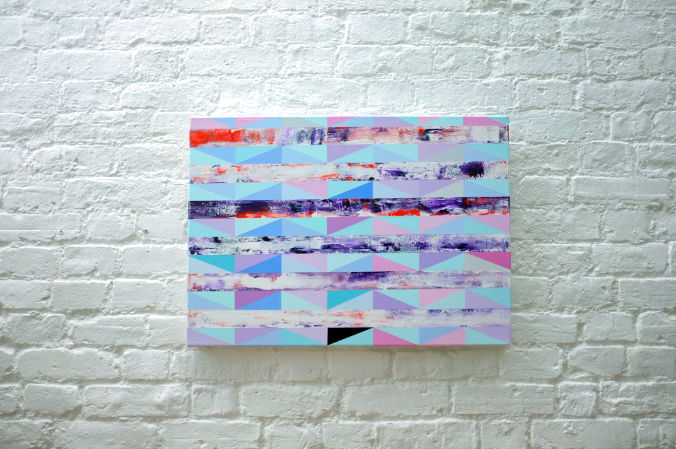 “That’s something to go from architecture, which was inspired really by journeys on the tube and taking loads of photographs … [and] it’s now emerging into something that could be about landscape – the sea or open space.” 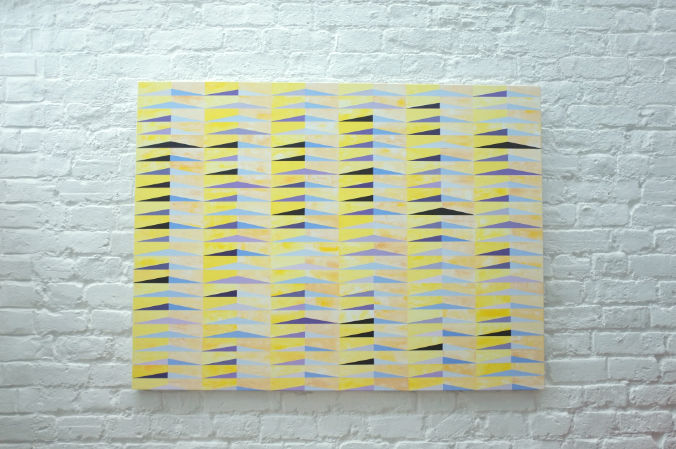 All images © Judith Rugg. For more information about any of her works or to purchase a piece, contact her at ruggjudith@gmail.com.

If you’re a Brixton-area artist or designer and would like to be featured, do get in touch and let’s talk.

Which Shakespeare play should you see?