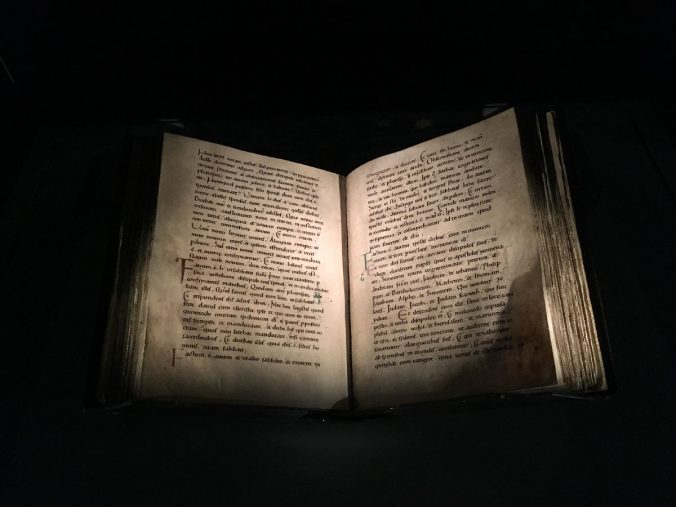 This book is a thousand years old.

Ted and I were *very* overdue a visit to some dear friends of ours. They live Oop North, you see, and we just hadn’t got ourselves together for far too long. So we hopped on the train to York.

Most of the weekend was taken up with chatting, playing hide-and-seek with the brood, watching a wonderful performance of the Billy Goats Gruff, and other extremely important things. It was blissful.

We did explore the Minster, though – and were so glad, because it’s easy to forget that some of England’s cathedrals are right up there with the best of France and Italy’s.

It was a rainy Saturday afternoon, and the Minster glowered at us through the clouds. 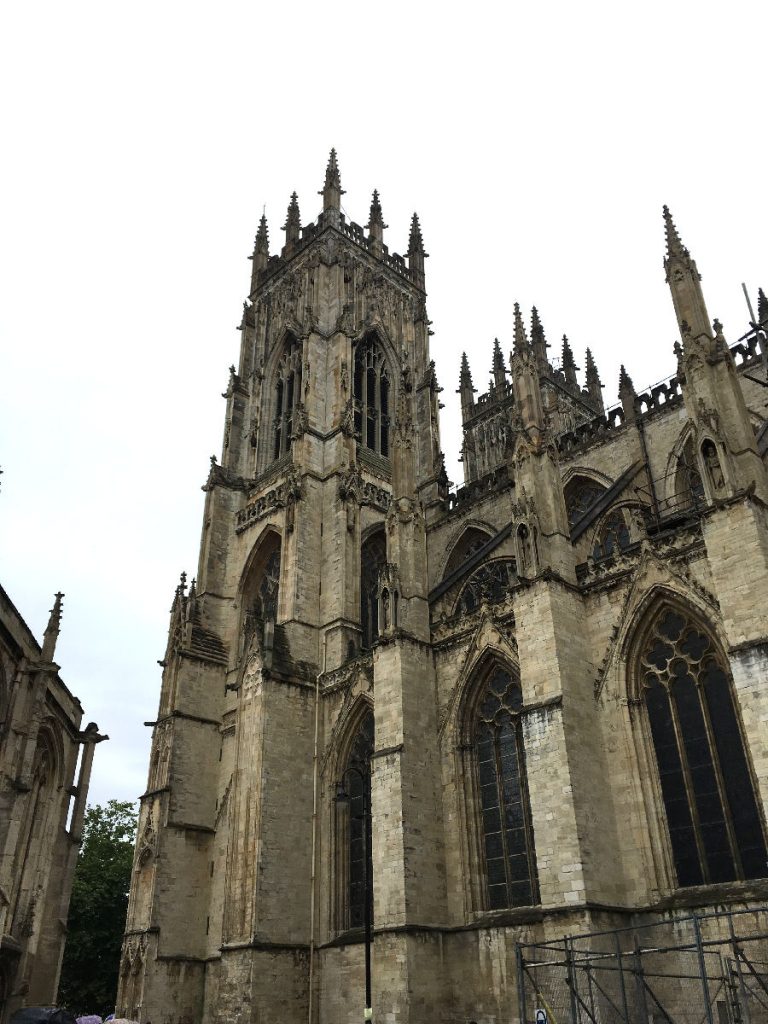 But inside, the ceilings soared above us. 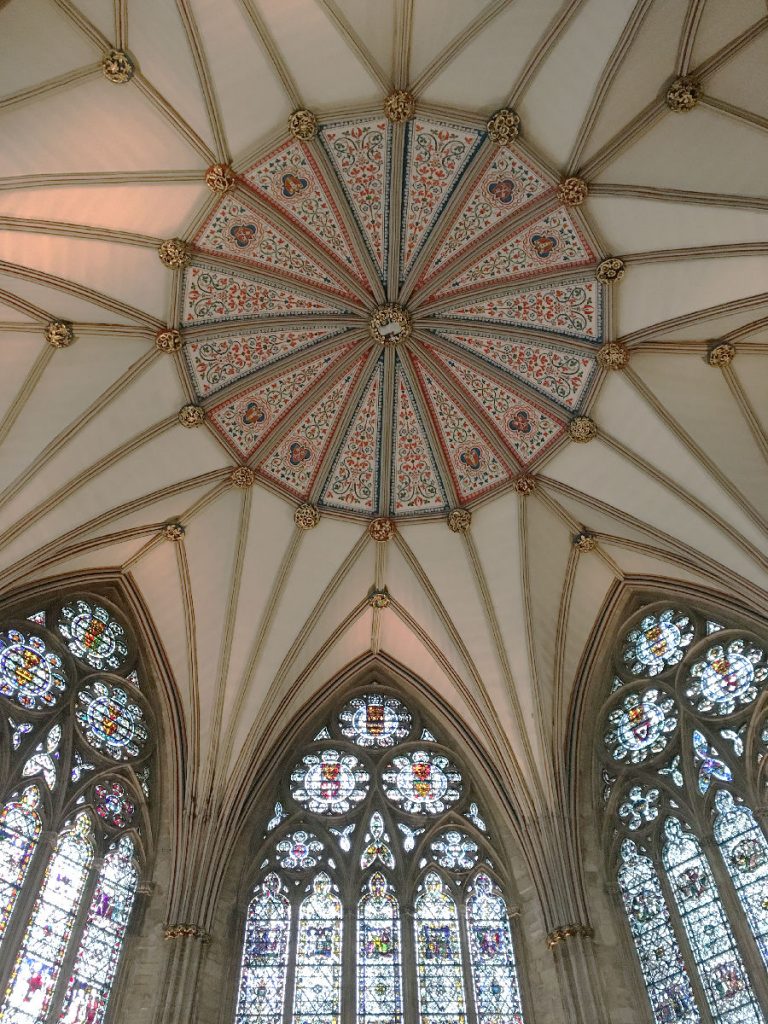 “Oh hai down there!”

The glass is astonishing. This window is called the Heart of Yorkshire, because of the shape of the stonework. 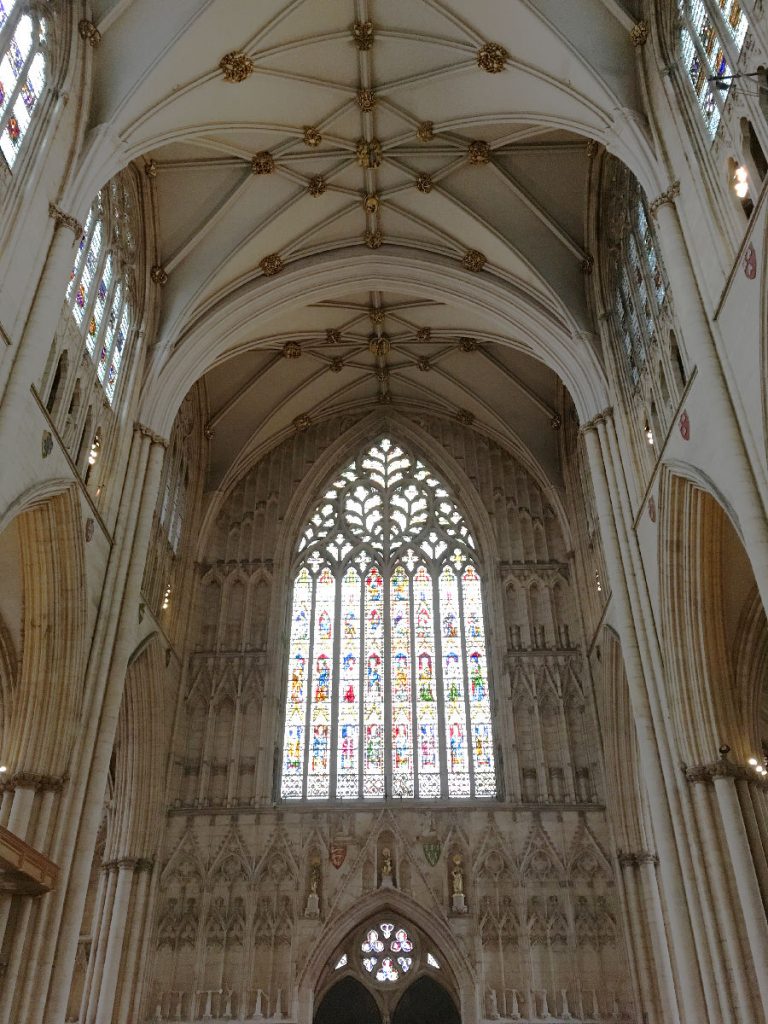 The secret to enduring love?

Apparently, if you kiss underneath it, you’ll stay together forever. Unfortunately, I only found this out just now, so we didn’t, so if it all goes wrong, you’ll know why.

This window, the Five Sisters, commemorates the contribution of the women of the British Empire to World War I. It was restored in the 1920s following a public appeal. 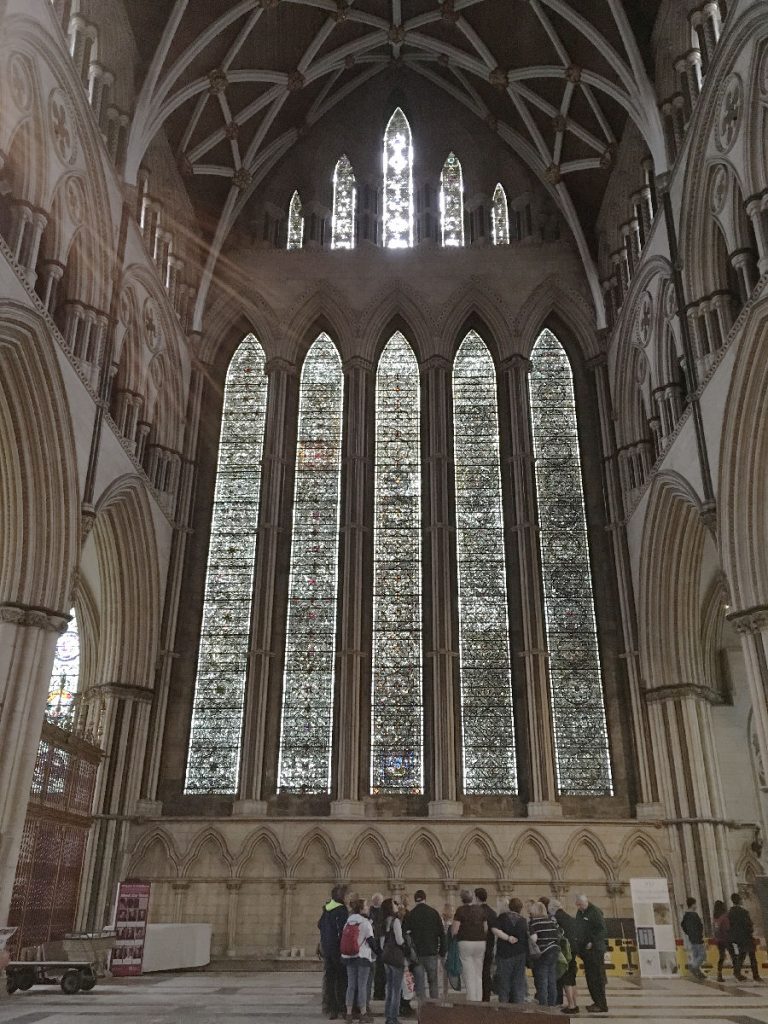 The glass really is grey – it’s a technique called grisaille, I learnt, which involves painting each small piece individually. It’s subtle and so beautiful.

The Chapter House was my favourite part. There are carved caricatures around the outside – some are respectable-looking churchmen, while others … well, do go and see if you have the chance. 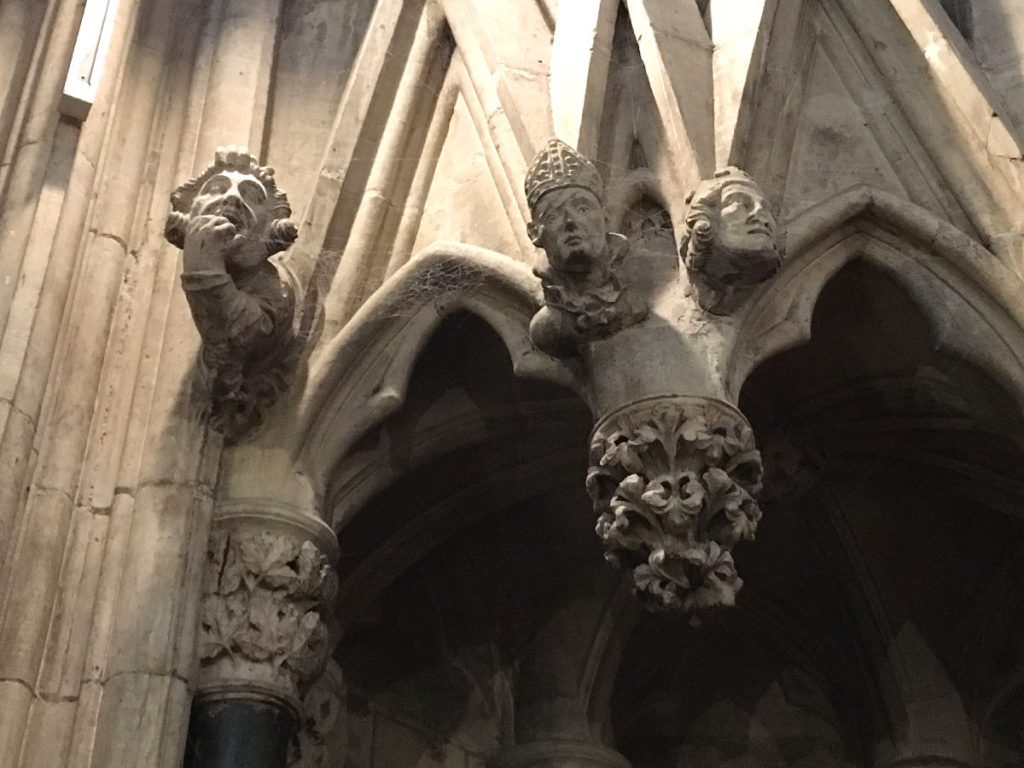 This bishop looks rather perturbed by his company …

These intricate statues of the kings of England looked rather disapproving, too. 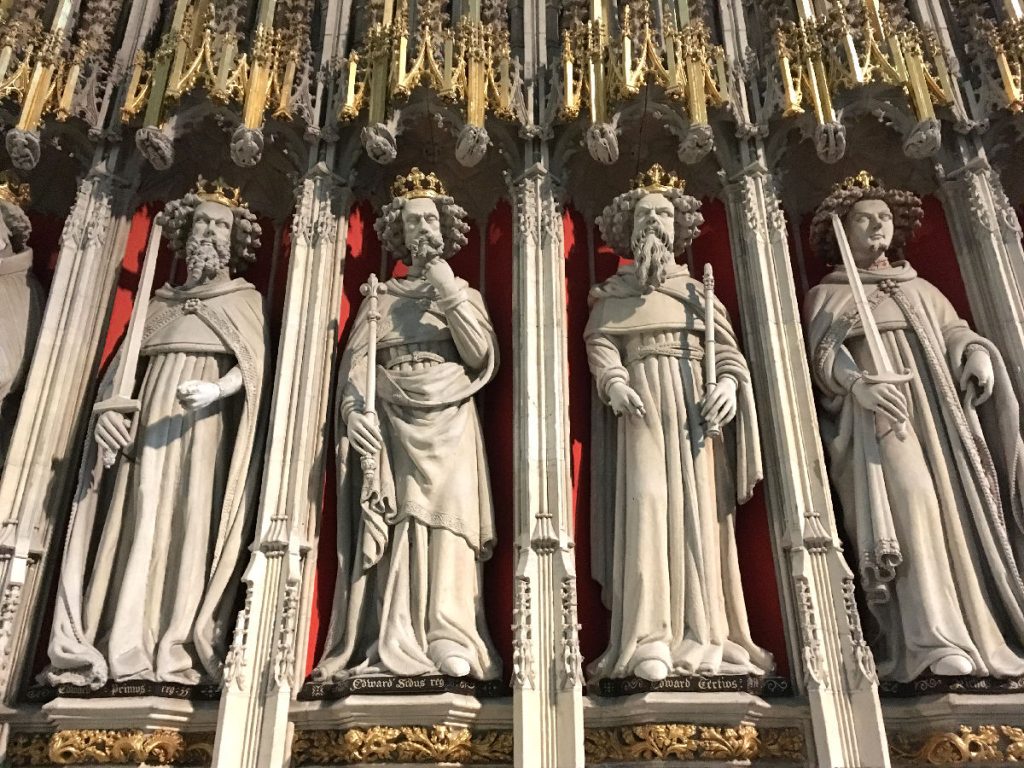 “Good lord, is that what our subjects look like these days?”

Perhaps they don’t appreciate being a tourist attraction.

Time to bow our heads in respect? 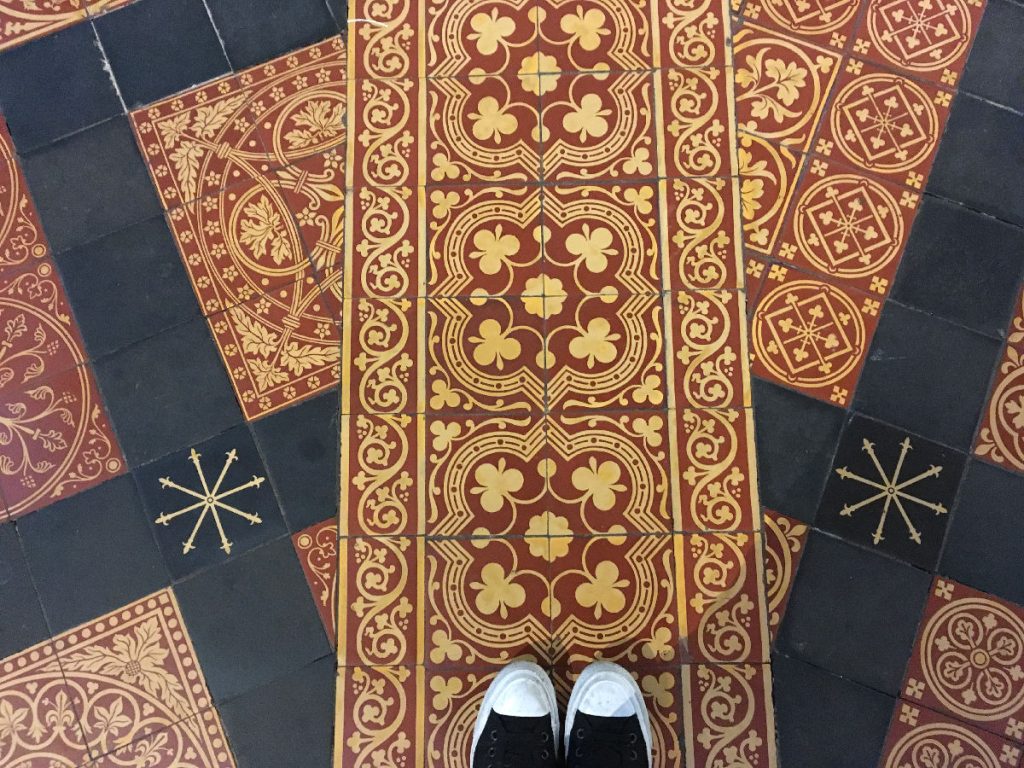 But the biggest thrill for me was seeing the York Gospels. This book of the Gospels was brought to York by Archbishop Wulfstan in around 1020.

This book is nearly a thousand years old. 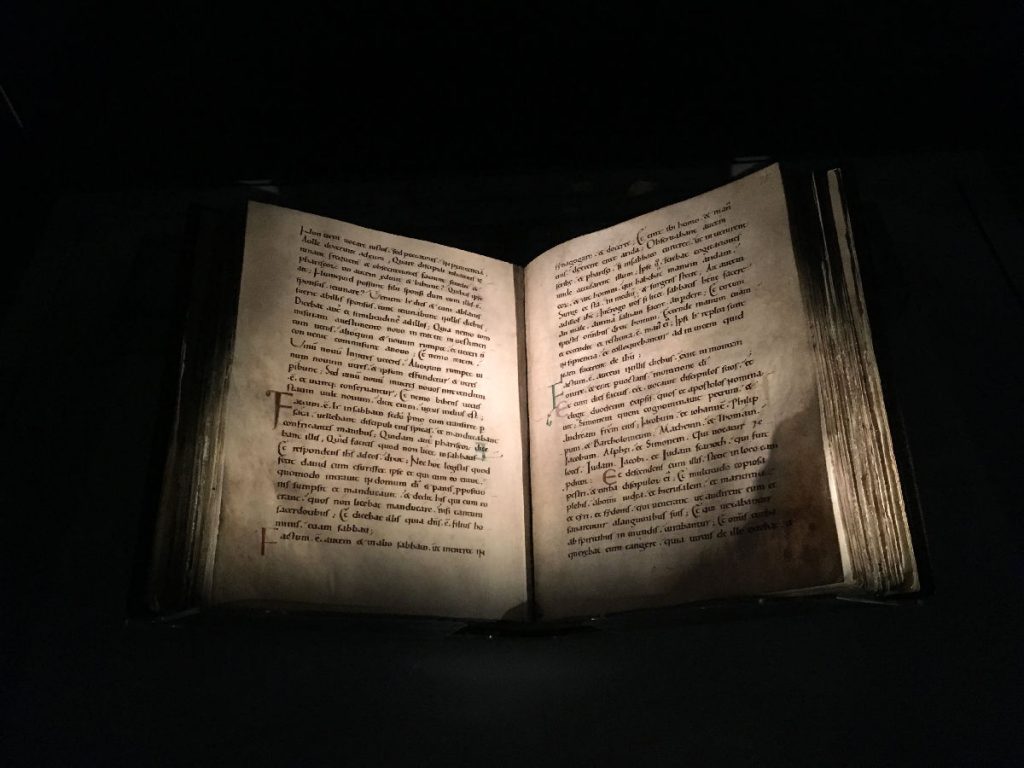 Archbishop Wulfstan was quite a character. He blamed the Viking raids at the time on the Anglo Saxons’ general degeneracy, gave a famous ear-bashing sermon to the whole country, put them all in penance for several days and helped the king draft rules of law, to stop everyone doing things they shouldn’t.

Maybe not top of my dinner party guestlist, but still, what a guy.

(I kind of like that in 990, these pages were first being created, and one thousand years later, on the other side of the Pennines, Bez and the Happy Mondays were releasing Pills, Thrills ‘n’ Bellyaches. Now that’s … progress?)

That night, we went out on Fossgate, starting with great cocktails from the crew at the Fossgate Social – a warm, cozy, delightful spot. We sat underneath fairylights (fairylights are scientifically proven to improve the quality of food and drink at any establishment by 20% FYI) and felt delightfully naughty to be bunking off childcare for the night. (Well, the northerners did. We were just happy to be enablers.)

Then we moved a few doors down to Ambiente for dinner. It’s lovely, the food is excellent and so are the people who run it. 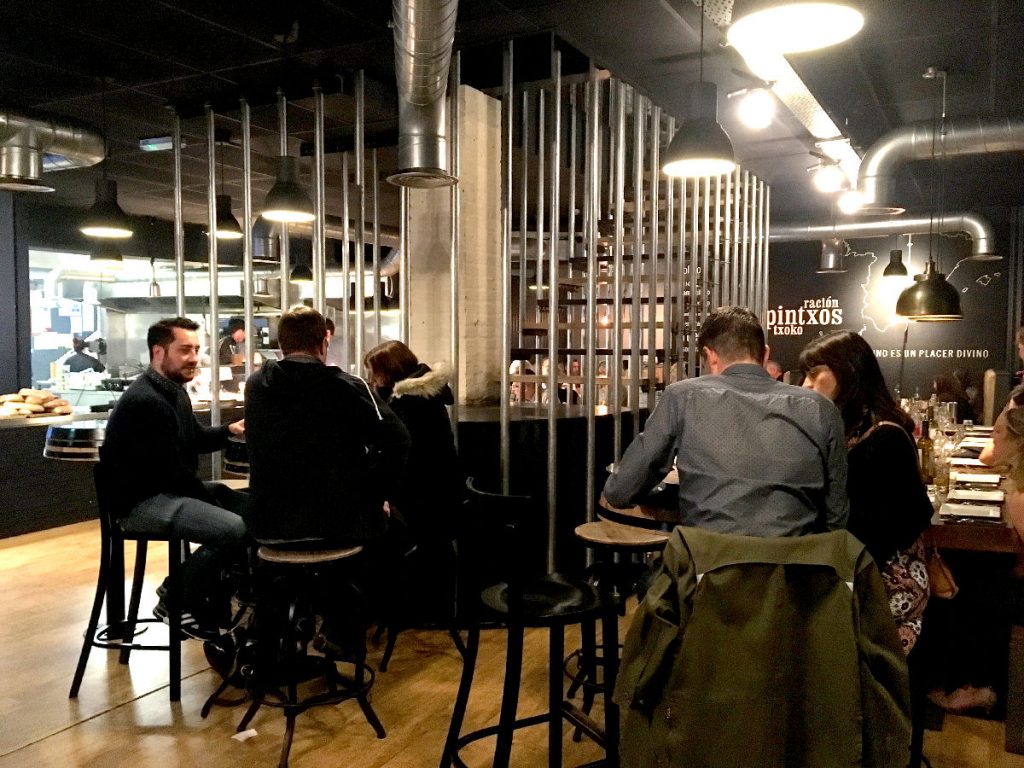 It was a birthday, so a tasting of sherry flights was in order: 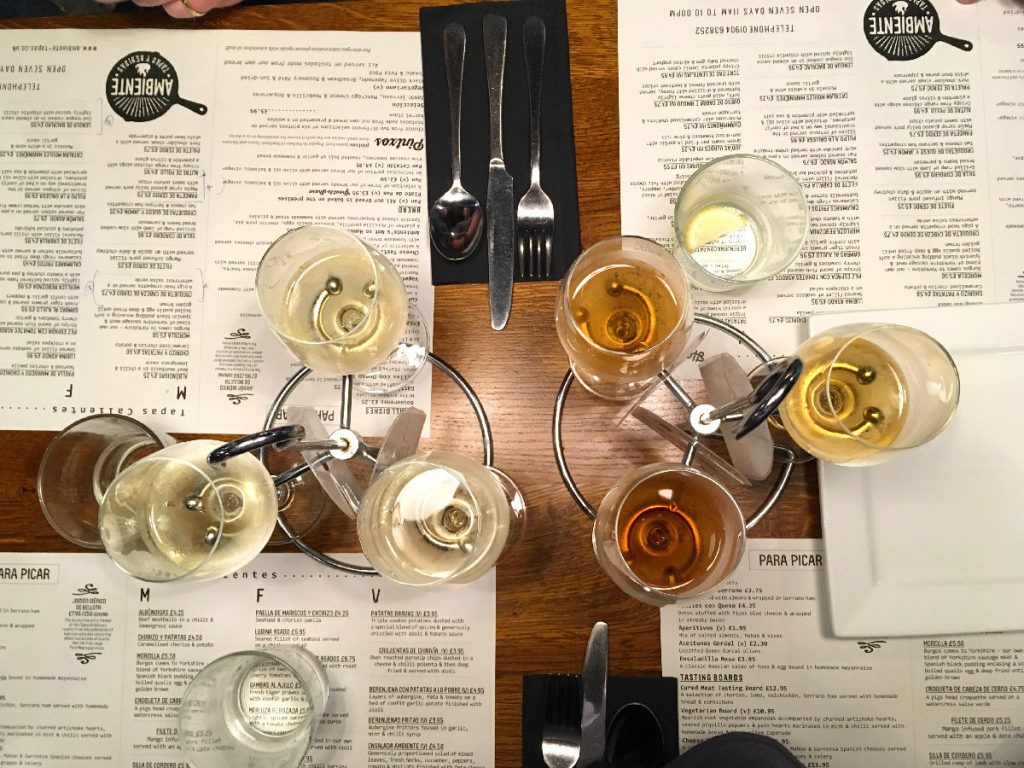 We all went for number 3. Or was it number 2? Best try them again …

The tapas was excellent. 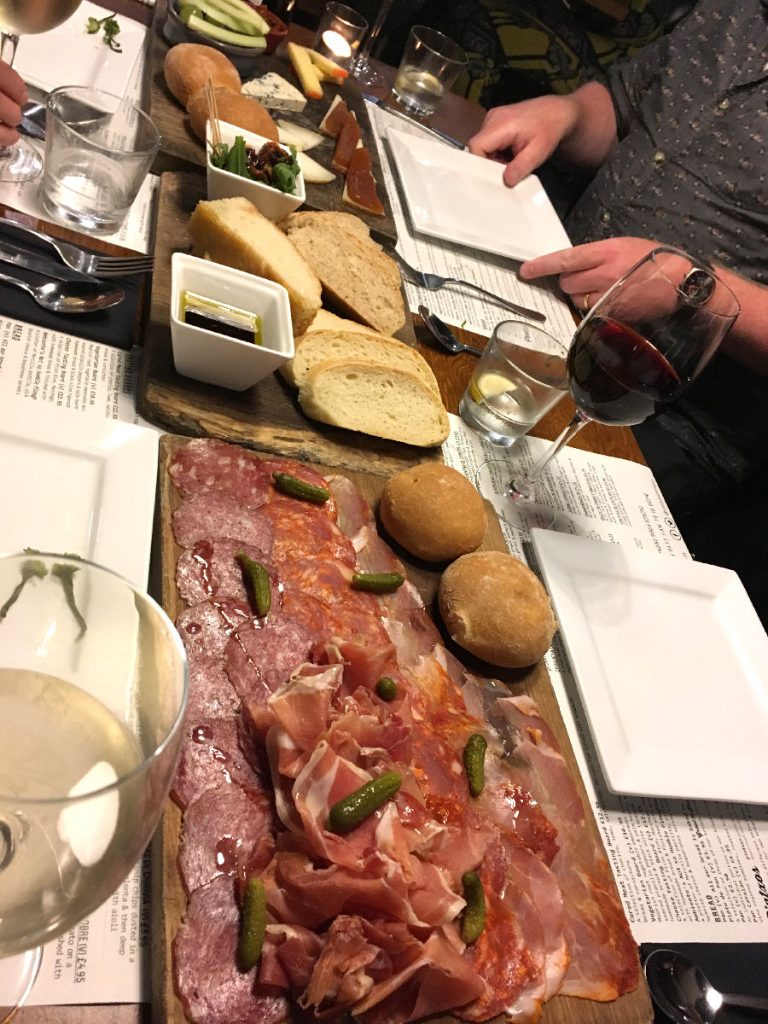 If you go (do go), look out for the chorizo in red wine. It’s sent from heaven. (Perhaps Wulfstan had something to do with that too.)

Now, let’s take another look at those cold meats, shall we? 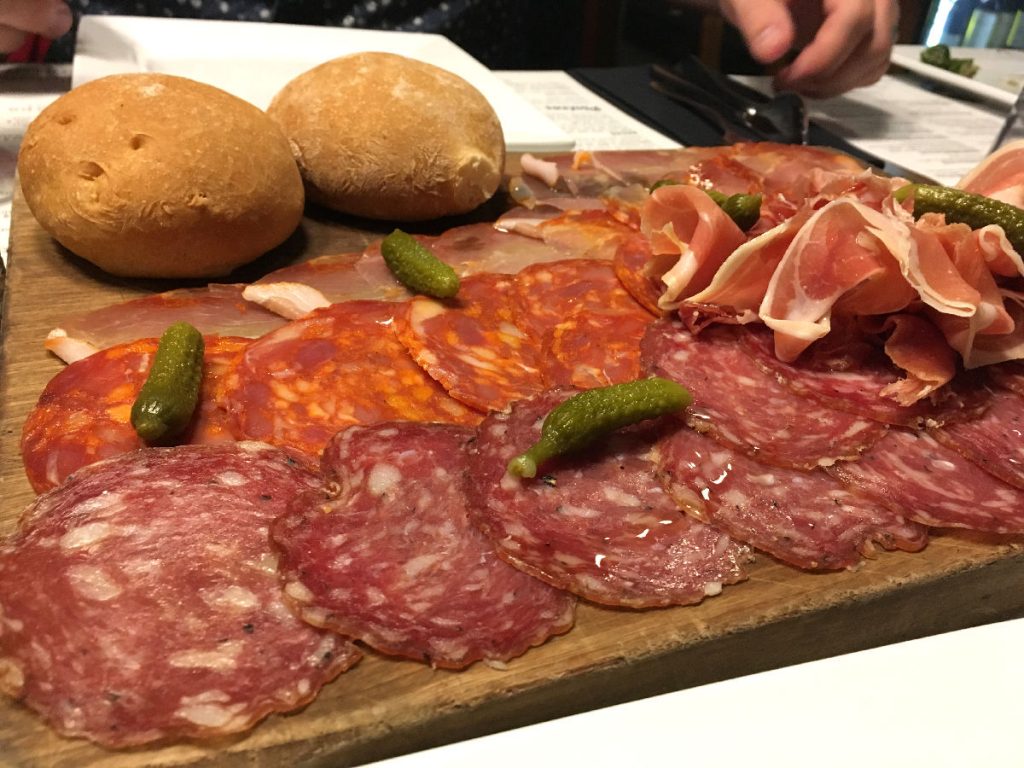